HEAD FOR THE HILL 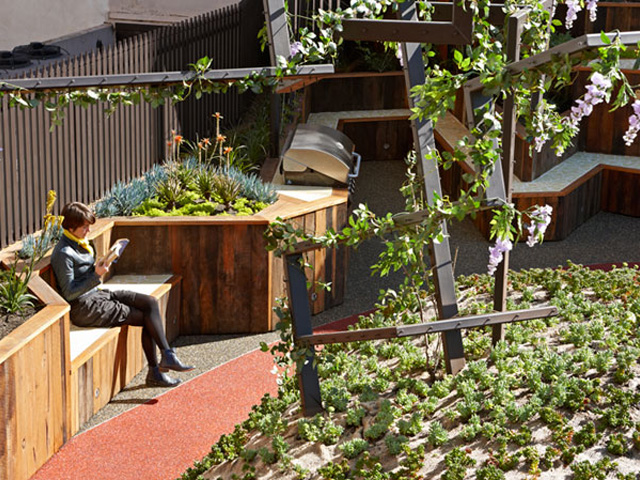 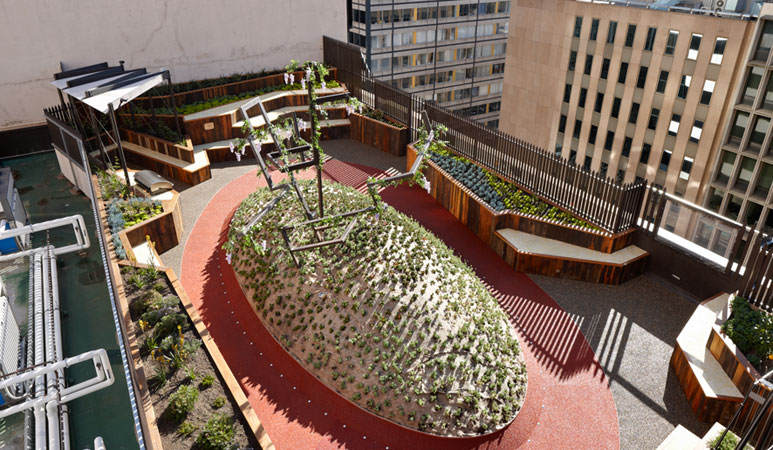 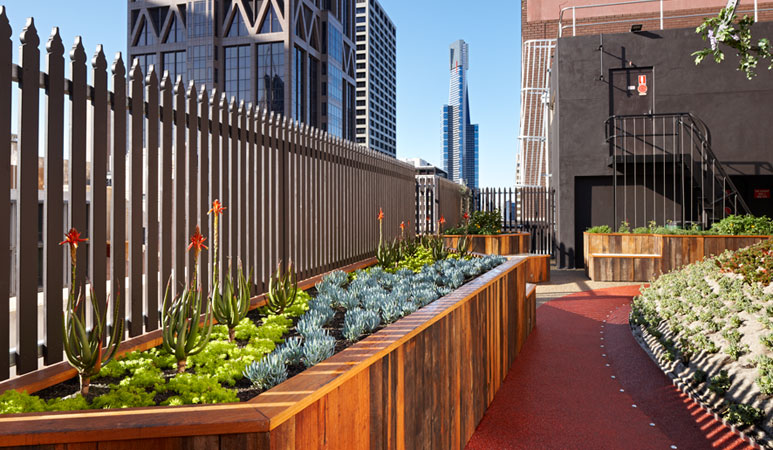 An intriguing green ‘hill’ and roof in Melbourne’s CBD is fighting climate change.

The ‘before’ photographs of the rooftop at 131 Queen Street in the heart of Melbourne speak volumes. An expanse of unattractive concrete littered with the various pieces of mechanical equipment, typical of many rooftops in major cities across Australia.

Today that 10th storey rooftop landscape has been transformed into a green oasis and renamed 'Head for the Hill'. With a central landscaped hill, seating, a barbecue, a gazebo, terracing and a picket fence there is also a garden with over 1300 succulents and native flowering plants, a herb garden, lemon and olive trees and passionfruit vines.

But the rooftop garden at 131 Queen Street designed by BENT Architecture isn’t just about good looks. It’s also a research hub for the University of Melbourne to collect green roof performance data. The rooftop cleverly and unobtrusively houses monitoring equipment, a centralised roof water collection and irrigation system along with a micro-weather station.

All the construction materials and growing mediums involved in the project were chosen for their weight and ability to drain water away from, and not into, the ceiling of the building beneath. Products used to create the garden included a neoprene water membrane that has 1600 per cent elasticity and Elmich drainage cells, and geo fabric formed the base upon which soil, pebble and glass mixes could be laid.

Recycled timber cladding was used for the planter beds, recycled expanded polystyrene formed the hill and salvaged second-hand tiles were used in the seating. Rainwater is collected from surrounding roof structures and gravity fed to water tanks at roof level.

'Head for the Hill' won the prestigious ‘Growing Up’ green roof competition. The competition is an initiative of the Committee for Melbourne’s Future Focus Group which fights to increase Melbourne’s resilience to climate change and to enhance the city’s liveability by installing green roofs.

Melbourne Lord Mayor, Robert Doyle, officially opened the green rooftop in late 2010. “Looking at our city via a satellite image, I was struck by the huge expanse of space that sits on top of our buildings. Rooftops make up 17 per cent of total land area in the city,” says the Lord Mayor.

“This green roof is a practical example of the benefits of environmental sustainability and gives the owners, tenants and visitors to 131 Queen Street a whole new space in which to meet.”

Mr Doyle said 131 Queen Street was an ‘excellent example’ of government, private building owners and businesses working together for a more sustainable future. The building is home to 20 small businesses ranging from an art gallery to a language centre.

The Growing Up project offered building owners in the CBD the opportunity to win a free roof garden, designed and retrofitted specifically for their building. BENT Architecture’s design for 131 Queen Street was judged as the most sustainable and innovative, winning a prize of $10,000.

“We have a sea of grey concrete up there and we really wanted to capture people’s imagination and point out that building owners aren’t using all the building space they can,” she says.

Landscape Solutions for the Construction Industry