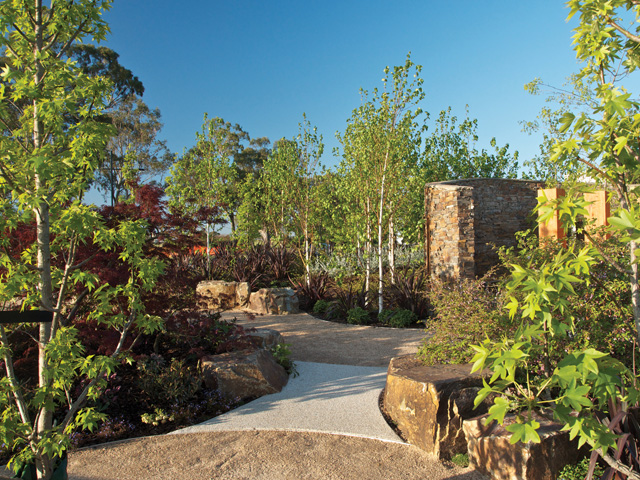 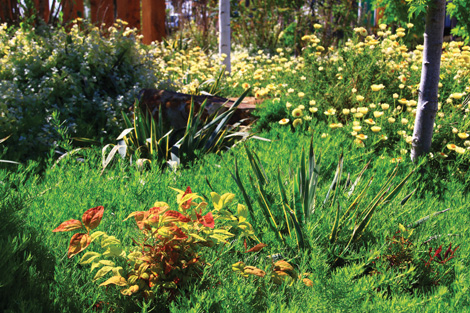 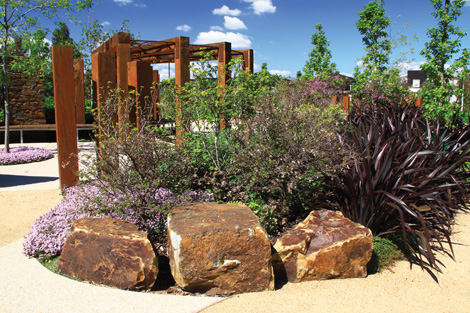 Fleming’s Nurseries were invited to build a garden at Somerfield Estate by Intrapac Projects. Intrapac wanted to use landscape to create a difference to other developments in the area. They also wanted to tap into nine years of experience at the Chelsea flower shower including five gold medals.

Flemings chose to partner with TLC Pools on the project. This combination brought home a gold medal from Chelsea in 2010. Together they worked to create something very special and very much world-class.

The ‘Chelsea Garden’, as it is called, needed to complement the existing landscape works whilst, at the same time, being outstanding:

• Stone cladding was used that blended with existing works,
• The existing water feature and the garden are connected via exposed aggregate pathways that flow like the running water of a tributary,
• High visibility from the nearby major road was achieved with a combination of high stone wall and massive timber posts,
• The curved walls create an impression of intimacy and privacy, yet slots in the brickwork allow openness and visibility,
• The planting is complex, varied and plentiful in the tradition of a Chelsea garden.

TLC designed the hard landscaping aspects in conjunction with Flemings and the plants have been chosen, planted and cared for by Fleming’s Nurseries.

The selection of plants and style of the planting are both critical and complementary to the structural elements of the garden. The garden has been densely planted to avoid ‘short-cutting’ through flower beds. Both deciduous and evergreen plants have been chosen to provide year-round interest.

On completion, this garden looked as though it had been established for many years. This was achieved by using mature trees including two six metre Quercus palustris ‘Early Fall’, many upright Liquidambar styraciflua ‘Oakville Highlight’ and Betula utilis var. jacquemontii. All trees complemented and enhanced the impression of the vertical structures.

Plants have also been chosen to provide year-round interest and colour with: Magnolia, Cercis ‘Lavendar Twist’™, Iberis, Helleborus, Salvia, Thyme, Phormiun ‘All Black’, Prunus ‘Kojo No Mai’, Rhaphiolepis ‘Oriental Pearl’ as well as many others. As the exotic planting reaches the edge of the garden, native shrubs have been utilised to blend in with the surrounding environment. This garden also won the 2012 LV Feature in Landscape award.