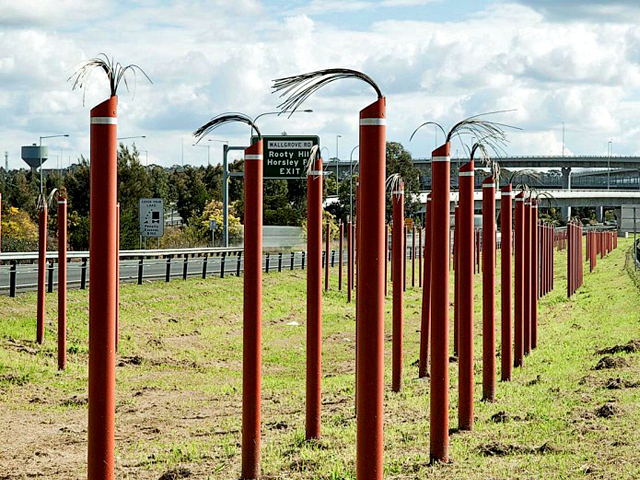 During World War II the Australian Light Horse soldiers were based in Western Sydney at a major training camp, then called Wallgrove, where the motorway interchange is now located. During the war, Light Horsemen patrolled the main water supply pipeline that runs through the area. It is because of this long association that it was decided that the interchange at Eastern Creek should be called the Light Horse Interchange.

The Australian Light Horse were mounted regiments from New South Wales and other States that fought at Gallipoli and in the famous charge of Beersheba.

Later, one regiment was sent to France, with the remaining 14 regiments taking part in battles in the Middle East, the most famous of which was the charge of Beersheba. This charge was one of the last mounted charges in history and the last successful mounted charge in military history. At Beersheba the 4th and the 12th Light Horse regiments charged into the Turkish trenches, machine guns and artillery positions at 4:30 pm on 31 October 1917. Beersheba fell to the Australian Light Horse who eventually entered Jerusalem and were the first allied troops to enter Damascus, shortly before the Armistice.

The sculpture has a central mast and four sets of radiating markers representing the Australian Light Horse on parade. The 55m high mast with its reflective crown, located at the centre of the Light Horse Interchange, provides a focus to the sculpture. The lit mast and crown symbolise a torch in the dark.

Red, the colour of the Flanders poppy and poppies that bloomed throughout Palestine, is symbolic of the blood of supreme sacrifice and is the colour chosen for the sculptural group. The abstract plumage attached to each marker represents the emu plumes attached to the Light Horsemen’s slouch hats while the white band is a reference to the departing soldiers’ innocence of war.

Australian quarantine regulations prevented the return of any horse that had survived the battles. The old and sick horses were shot, while the remainder was handed over to British units. As a reminder of every Light Horseman’s loss in leaving his horse behind, there is no physical representation of the horse in the sculpture.

The sculpture was designed by Conybeare Morrison Architectural Firm.