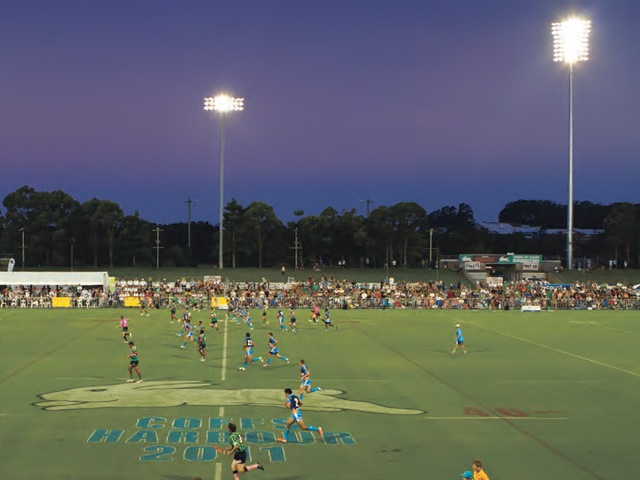 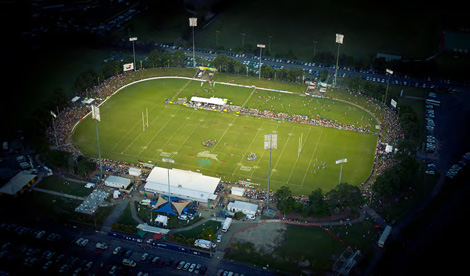 “The council wanted to broadcast nationally, and they wanted professional football events,” said Sanjay Prakash, general manager for Musco Australia, “yet in order to host that level of competition light had to be amongst the best current technology in the world.”

Economic benefitsThe benefits of purchasing state-of-the-art lighting at the stadium were not only important for the stadium itself, but for the geographical region and local economy. “Sport tourism is a major contributor to the local economy,” said Nikki Greenwood, the Sports Unit Manager for the Coffs Harbour City Council. “With sporting events contributing an estimated 30 million dollars to the area because of the capabilities we have.”

A city of 75,000, Coffs Harbour also understood that increasing light levels to world-class levels would put their stadium on an even playing field with those of Sydney or Melbourne. “We draw crowds from up to five hours away, and having a stadium that can host events like our major cities can was an important economic benefit,” explained Greenwood.

Challenges along the wayThe next hurdle to overcome was funding. This was a large project and the council decided to apply for a national grant that would fully fund the project.

One of the major advantages of Coffs Harbour’s grant proposal was Musco’s energy-efficient lighting. “That was huge. “It was a very important part of the grant, to include the green information along with the long-term warranty,” said Prakash. Last summer, the council received the good news that the project would be fully funded.

However, before the city could take the next step to update their stadium’s lighting, a bid process had to be done. Musco won the bid due to organisation, superior technology, and environmental savings that could not be matched by others. However, the design was challenging, the budget was tight, and time was an issue.

A special design, unlike any other in the region had to be developed – to allow for the different-sized pitches (fields) of rugby and football without interfering with the play of either sport. After looking at the existing poles and fixtures, and knowing the desired result from the council, Musco’s proposal was for more than 400 fixtures and four additional poles to bring the existing light levels up to the required 1500 lux.

With the funding in place, the lights were ordered, but the challenging design needed to be completed, produced, and installed before the February 19th NRL pre-season trial match between the South Sydney Rabbitohs and the Gold Coast Titans. With a dedicated team effort and outstanding working relationship with Coffs Harbour City Council the project was put in motion, and the Musco team was ready for the install.

Chris Hoy, International Projects Manager, recalled the time he spent there: “It was raining so hard on the night we laid out the cones that our clothes were as wet as if we had just taken them out of the washer.” The crew used the cones to mark the grid and take light readings. They entered the information into Chris’ computer and were able to fine-tune the fixtures. Once that was completed the field was ready for play for one of the largest crowds to ever attend a sporting event at the stadium.

Musco and Coffs Harbour worked hard together to get things done. “I’m sure Musco team members had a million things to do, but we felt like we were always getting their full attention. They knew we had a tight deadline, and we all worked together to make it happen,” explained Greenwood.

Lights benefitting the entire communityHaving a stadium with lights that can produce levels at 1500 lux along with being superior in technology has benefited the whole community. The reduction in energy

usage has allowed the council to reduce the hire fee for use of the lights by 50% at 200 lux, and sport tourism is predicted to bring more and more money to the local economy. Not to mention the 120 Musco light fixtures that were installed in the stadium in 1995 will not go to waste. The council plan to provide the fixtures to local fields throughout the area to have flood lights at many other locations for all levels of play.

The final result is a regional city with a stadium now able to host play at an international level, a lighting company providing the most energy efficient lighting that halves usage costs, and a community able to light more of their own local sports fields.