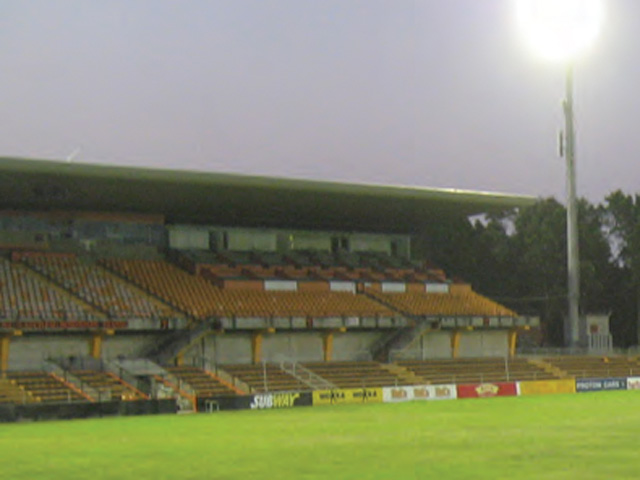 New lights are restoring life to a legendary rugby league venue. As one of the oldest stadiums still holding games in the National Rugby League, loyal fans and media are hard pressed to name a facility with more history and tradition than Leichardt Oval.

Managed by Leichardt Council and home to the professional Wests Tigers, the 20,000-capacity stadium near Sydney provides a classic rugby league atmosphere with unmatched fan intensity as supporters are seated nearly on top of the playing area.

“When the joint is full, there are few places like it to conduct a broadcast from,” said Fox Sports Broadcaster, Warren Smith, in his online column.

First used as a National Rugby League football ground in 1936, the multi-purpose stadium underwent a major overhaul during the 70s when city officials changed the configuration of the ground from east-west to north-south. Lighting was installed in 1974 prior to hosting the Amco Cup. At the time, it was regarded as one of the NRL’s best suburban rugby league grounds — and rarer yet — one of the few equipped to host night games.

As Leichardt Oval’s popularity rose again, recreational teams such as the Balmain Junior League and Balmain Tigers began training and playing on the ground. Today, it also hosts a number of school, military, and recreational rugby leagues and is an attractive venue for community events.

But the years were taking their toll. Although still a viable stadium for the highest level of rugby league in Australia, Leichardt Oval has become one of three home grounds for the Wests Tigers along with Cambelltown and Telstra, it now hosts only three home games during the February to September season.

While the decision to reduce the Oval’s home games was primarily tied to issues such as ground capacity, corporate facilities, and financial incentives to play games at the newer Telstra Stadium—which hosted the Sydney Olympics competitions in 2000—the existing lighting system was operating at levels far below NRL television broadcast standards.

“The lighting was unsuitable for TV unless it was supplemented with extra floodlights at a considerable cost to the Tiger’s administration,” said Head. “Neither the team nor the Council had the funds to pay for the upgrade and grant funding was not available until we secured a state government interest-free loan.”

Musco to the rescueLeichardt Council (LC) officials determined the most cost-effective solution for the stadium was the installation of Musco’s proposed SportsCluster Green™ system, which would allow a significant savings by adapting new state-of-the-art lighting fixtures to the existing system’s infrastructure.

The new 1,500-watt luminaires resulted in a significant increase in light levels. Previous light levels which hovered around 500 lux, jumped up to 1,400 lux to the main camera and color rendering was more than satisfactory despite the lower wattage lamps.

A key advantage of the new system that resulted in substantial savings was being able to perform the retrofit at established primary power levels. “SportsCluster Green™ easily attached to the existing structurally sound poles, but more importantly LC did not need to increase the existing structural or electrical loads, which enabled the upgrade to be completed economically,” Musco Representative Sanjay Prakash said.

Added LC’s Peter Head, “Reducing the power demand without compromising the lighting quality enabled us to defer our consumer mains upgrade until next year rather than straight away which would have imposed even more funding problems.”

As Balmain Tigers CEO, Tim Camiller, points out, “This lighting project was a necessary addition to a wonderful, historic suburban football ground. The lighting upgrade was the first step to improving the commerciality of the stadium. It has widened the potential use of the facility which benefits both our team as well as the whole community. The energy savings only enhance this benefit,” Camiller added.

Those next redevelopment steps will soon be taken with the help of $1.5 million in grants from the State as well as $3 million from the newly elected Federal Government. And, Leichardt Council has pledged its on-going support to secure more home games at Leichardt Oval.

If the facility is modernised and the schedule expanded, it’s sure to be an exciting chapter of history for a stadium with the potential to light another new generation of rugby.