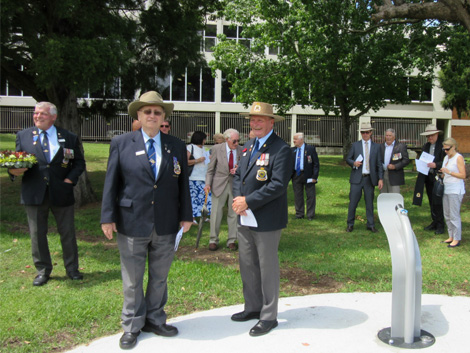 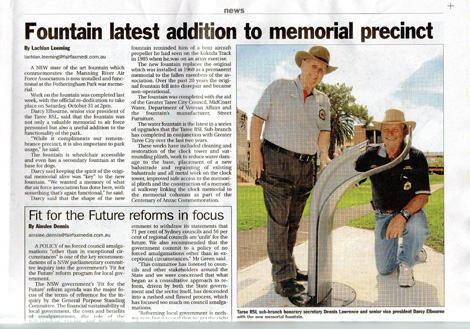 War memorials in towns across the country are being restored to honour the Centenary of Anzac, with a new drinking fountain the latest upgrade to Taree’s Fotheringham Park.

The original fountain was installed in 1960 by the Manning River Air Force Association, but fell into disrepair.

Darcy Elbourne, senior vice president of the Taree RSL, which is leading the upgrade, says the fountain is both a valuable memorial to air force personnel and a functional asset for the park.

He says, “Taree’s Fotheringham Park is adjacent to the beautiful Manning River and is a major stopover for people traveling between Sydney and Brisbane. It is used by both locals and visitors alike.

“We wanted a memory of what the air force association has done here, with something that’s again functional.”

Darcy says the shape of the fountain reminds him of a bent aircraft propeller he saw on the Kokoda Track in 1985 when he was on an army exercise.

Veterans gathered to rededicate the new fountain on October 31, with a laying of a wreath and the Ode of Remembrance.

The restoration was funded by contributions from RSL members, a grant from the Department of Veterans Affairs and support from Mid Coast Water, Greater Taree City Council and Street Furniture Australia.

Fotheringham Park will see a series of upgrades during the Centenary period, including restoration of the 90 year old clocktower, a new walkway linking the clock to memorial plinths and two new Digger statues in 2018.