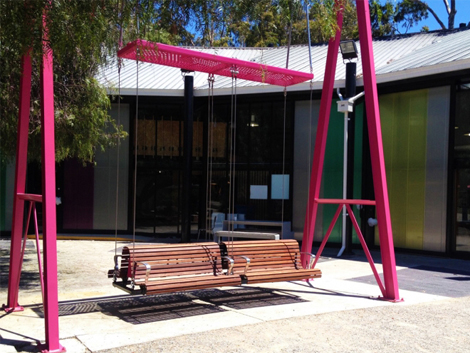 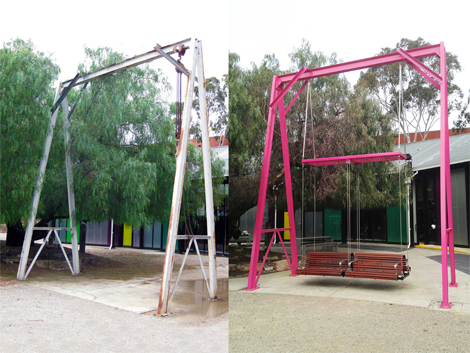 This new vision includes Building 204, just north of the Spine. RMIT’s Property Services senior manager, Nandor Bartol, was tasked with repositioning Building 204 as an integral part of the walkway. His first step was to commission 1:1 Architects to refurbish Building 204 into a new Student Services facility, with communal lounges, meeting rooms, offices, student union facilities and a home for RMIT’s Queer Department and Lounge.

Landscape architect Tim Hart and the team at Urban Initiatives were brought onboard to ensure the re-enlivened building made the most of its sheltered courtyard, while connecting the facility with the Spine. “Our brief was to design a landscape that responded to the new function of the building and its environment,” says Tim.

Urban Initiatives’ scheme introduced a “palette of open woodland plantings”, creating sunny and shady opportunities for students to gather and socialise, or seek out a quiet space. But it was the building’s previous function that gave Tim and his team their design fuel. The building and courtyard were once home to RMIT’s School of Art and the courtyard featured relics from its creative past. “There were a number of interesting student-made sculptures and other features dotted around the courtyard,” says Tim. “We were keen to celebrate the site by making the most of these elements.”

He envisaged a swinging ‘mega seat’ suspended from the gantry, but when he set to work he quickly figured it would be more efficient to work with an established furniture manufacturer.

The highlight of Tim’s ‘found objects’ was a huge industrial gantry that had once been used to lift massive sculptures. Tim immediately saw its potential as both a striking sculptural centrepiece and functional asset. He envisaged a swinging ‘mega seat’ suspended from the gantry, but when he set to work he quickly figured it would be more efficient to work with an established furniture manufacturer. “We were also worried we might create something ‘clunky’,” laughs Tim, “so we enlisted the expertise of Street Furniture Australia.”

SFA’s team got straight to work on a custom design, employing off-the-shelf components for time and cost efficiencies, and working up construction drawings to help secure funding for this part of the project.

The result is two end-to-end SFA Classic Plaza Back to Back seats with eco-certified hardwood battens and powder-coated angle arms. At each end of the seat, stainless-steel panels feature laser cut decorations – a trio of love hearts up one end; LGBT symbols up the other – lending the seat its namesake, ‘Love Seat’. In keeping with the colourful panelled façade of the refurbished building, and celebrating the joy, playfulness and art of the piece, the gantry and stainless-steel features are powder-coated in glorious hot pink.

“The colour was a shock at first for some people,” says Tim. But once the space came of age it became apparent that the seat was more than just a striking centrepiece of the courtyard. It was a creative contribution – along with the other public artworks – to Bundoora Spine.