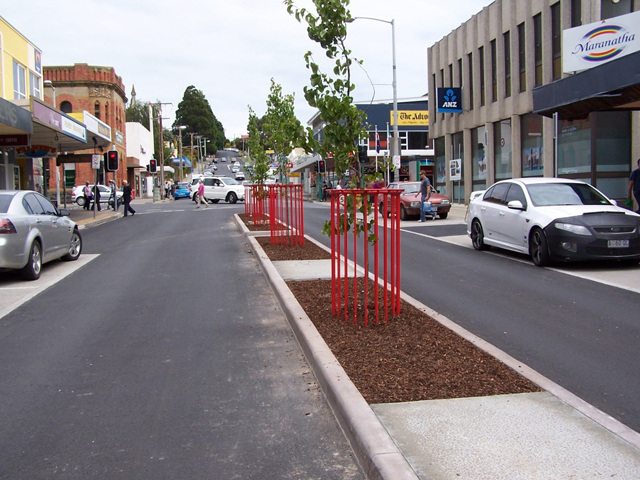 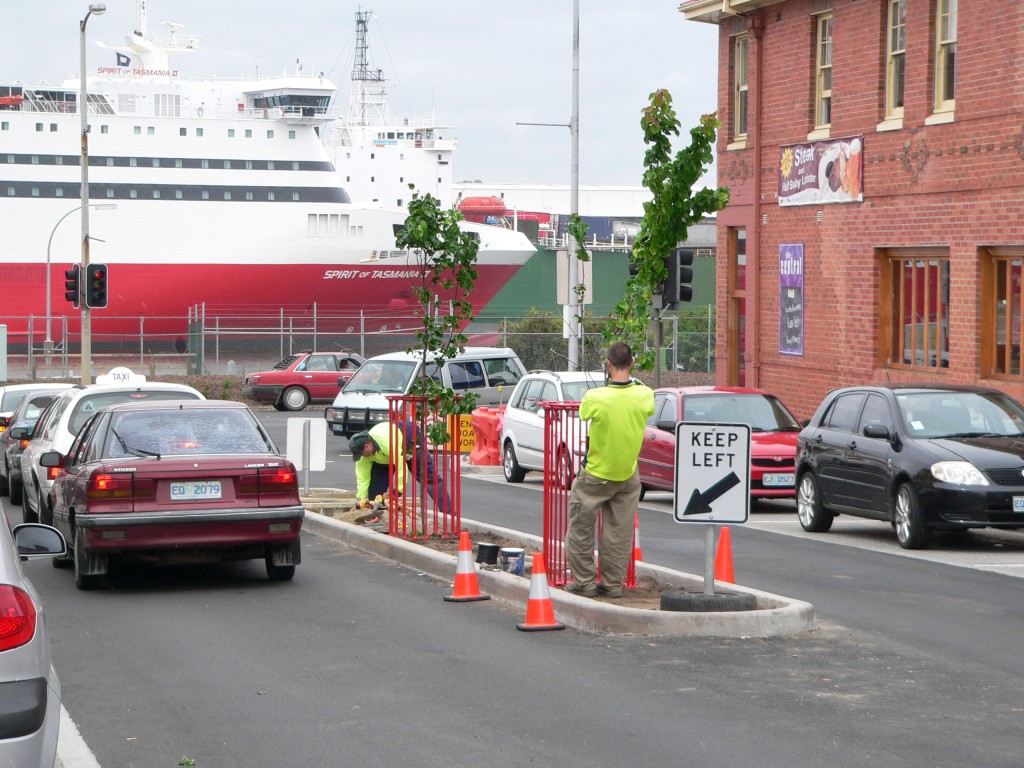 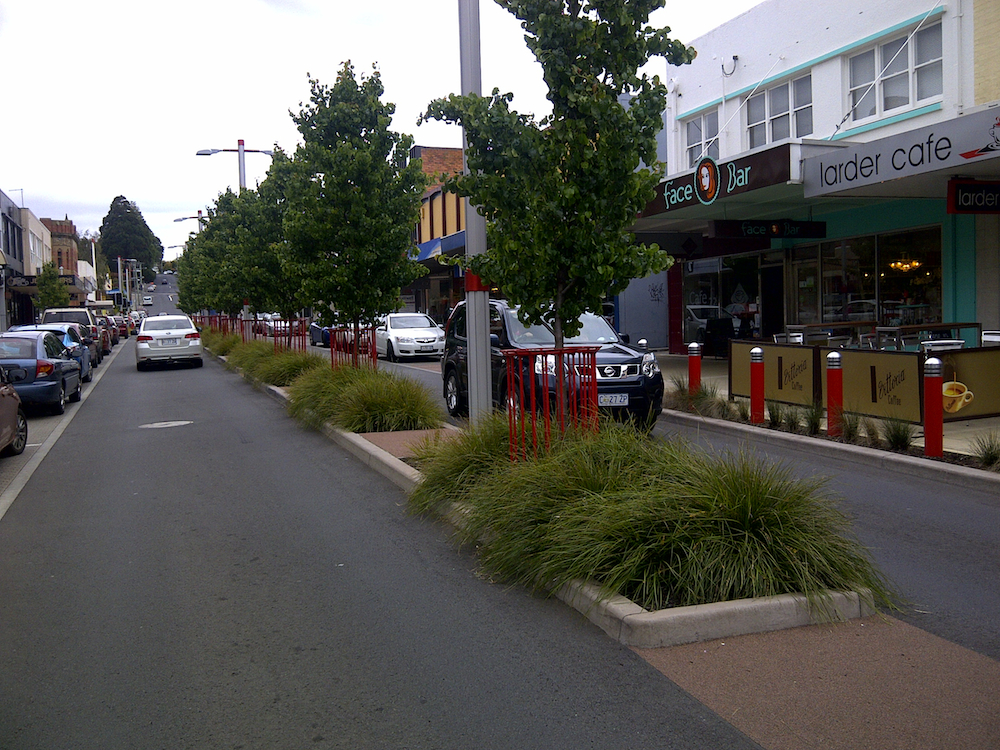 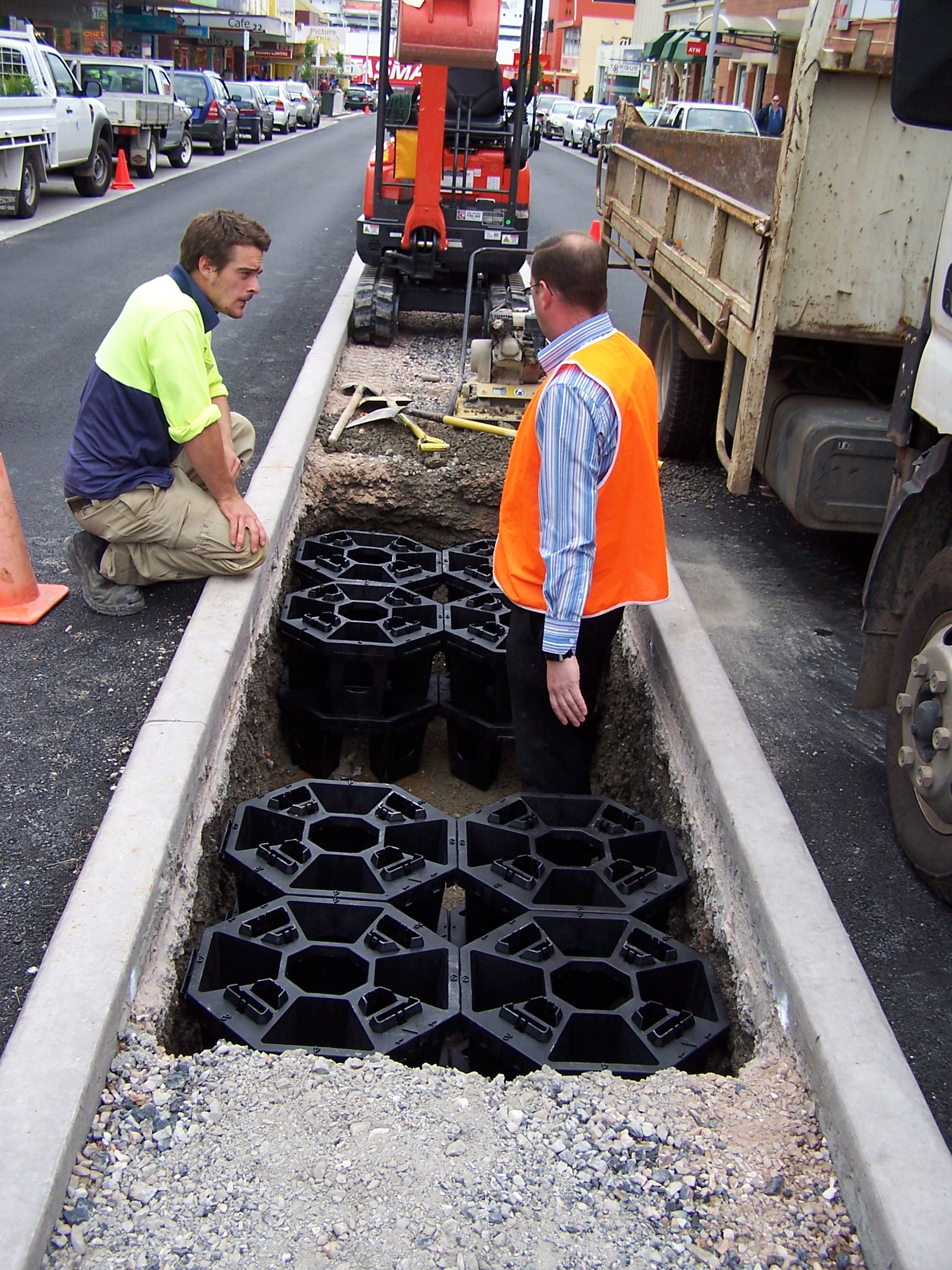 Another street has been transformed into a vibrant city streetscape with the help of the CityGreen® modular StrataCell system®.

The Devonport project in Tasmania has transformed Stewart Street by “calming traffic and promoting pedestrian use” primarily by the installation of a narrow tree-lined median down the centre of this inner city shopping street. They also wanted the design to promote on-street dining by creating a unique CBD precinct with an “identifying palette”.

Randell Stott, Urban Design Coordinator and Project Manager for Devonport City Council, ensured that the appropriate urban design features were incorporated into the streetscaping project. He managed the onsite works and provided information to the public during the construction of the project, which started in March 2010 and finished in December 2010.

The estimated cost for the Stewart Street redevelopment from Formby Road to Rooke Street was $1.6 million, with a further $120,000 estimated for the stormwater installation.

A couple of years after the completion of the project, Randell commented that the “trees have put on incredible growth unlike any that we have planted using traditional in-ground planting”.

In order to convert the street, the council used wider footpaths with large format decorative pavers, high quality street furniture, and the introduction of correctly chosen plant species into the city.

“The narrow roads act to calm vehicular traffic and created an opportunity for pedestrians to reclaim our city,”Randell said.

A central planting median narrowed the lane widths and calmed traffic in the street. The combined turn lane at the Formby Road corner created additional parking spaces in front of the Post Office.

“A detailed traffic analysis showed that after incorporating the new traffic calming measures, traffic movements would still be within an acceptable level of service,” Randell said.

The footpath area near Churchers Arcade was widened, with an added safe crossing point for pedestrians. These extra wide footpath areas were made available for on street dining and seating space.

“An overall increase in parking spaces was achieved even with the new widened footpath areas, by the smart use of available road space. The existing loading zone was relocated to an underutilized taxi zone near Rooke Lane. Additionally, a new delivery access was provided from the Formby Road carpark,” Randell said.

The new seating, a combination of benches and seats with back and arm rests, feature wood/plastic composite slats that are not only environmentally responsible but also comfortable. New bins, tree guards, and bollards were also added.

“A maritime theme has been adopted, the signal red colour also linking to the Spirit of Tasmania which berths at the opposite end of the street,” he said.

The project opted for a selection of deciduous trees. The ornamental pear provides autumn interest, filtered sunlight in colder months and shade in summer. The trees were planted in StrataCell modules and specifically chosen soil material that retain roots and prevents infrastructure damage.

The council decided to use the CityGreen system to support both the road and the trees. The road needed the structural integrity provided by the StrataCells and the trees needed the root growing space and aeration that the cells provide.

“The StrataCell system has allowed the trees to flourish in the inner city environment in a narrow median without compromising the strength of the road,” Randell said.

“We have used structural soil in the past but have experienced difficulty in getting consistency in the mixes. Using the StrataCell allowed us to just use a good friable soil and rely on the strength of the modules,” he added.

Randell said that the StrataCell modules were very easy to handle and install, and that they didn’t have any difficulties installing the product. “Arborgreen sent their representative over to provide the technical advice and training to ensure that our first installation went smoothly and correctly.”

He is happy to report that the system fits well with the overall design and concept of the project.

“Although completely unseen by the public, the StrataCells provide the strength for the road pavement and the space for the tree roots.” With the success of the project, Randell said they are planning to use the StrataCell system in future ventures.