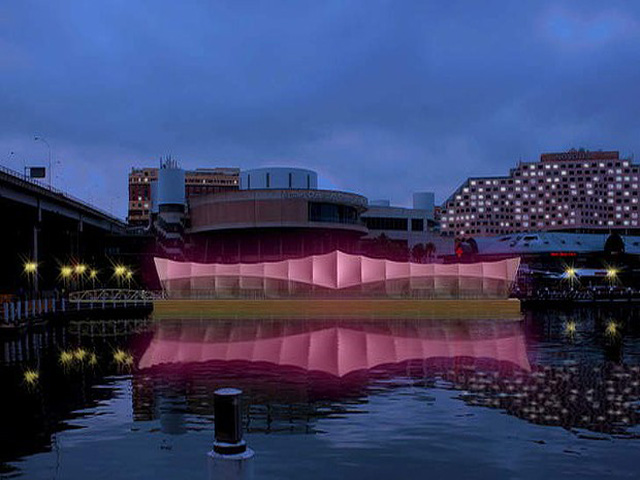 A floating pontoon with a draped fabric roof will soon appear in the waters of Darling Harbour to act as a substitute venue for events while the Sydney Convention Centre is being demolished and rebuilt.
The pontoon – which will be the largest floating venue in Australia – will be assembled at White Bay and then shifted to the south-west corner of Darling Harbour in five sections because it is too wide to fit through Pyrmont Bridge as a complete structure.

To be called Dockside Pavilion, the venue will be managed by hospitality firm Dockside Group and will open in mid-2014. It is expected to remain open for three years, while a $1 billion redevelopment of Darling Harbour is taking place.

As part of that overhaul, a new and larger convention and exhibition centre will be built and Tumbalong Park will be expanded to accommodate large outdoor events.

The last event was held on Sunday at the existing convention centre, which is now being stripped before demolition begins in February.

The Dockside Pavilion, which will cater to up to 1440 seated guests or 2000 standing guests, will complement the temporary exhibition space that has been set up at Glebe Island.

Christopher Drivas, the managing director of Dockside Group, said it was important to "keep Sydney open" for events during the redevelopment of Darling Harbour.

The pavilion was designed by fabric architect Warwick Bell from Fabric Structure Systems, who is best known for creating Louis Vuitton's 150th Anniversary Trunk - a giant venue in the shape of a suitcase that has been erected in various cities - and The Cloud, a venue that was one of Auckland's centrepieces when the city hosted the Rugby World Cup 2011.