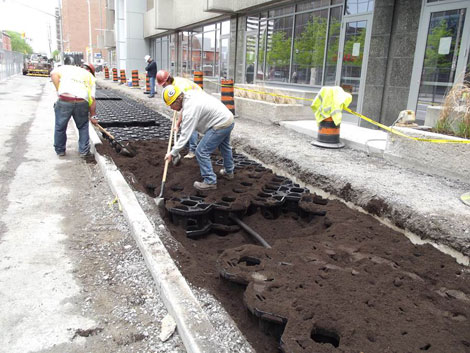 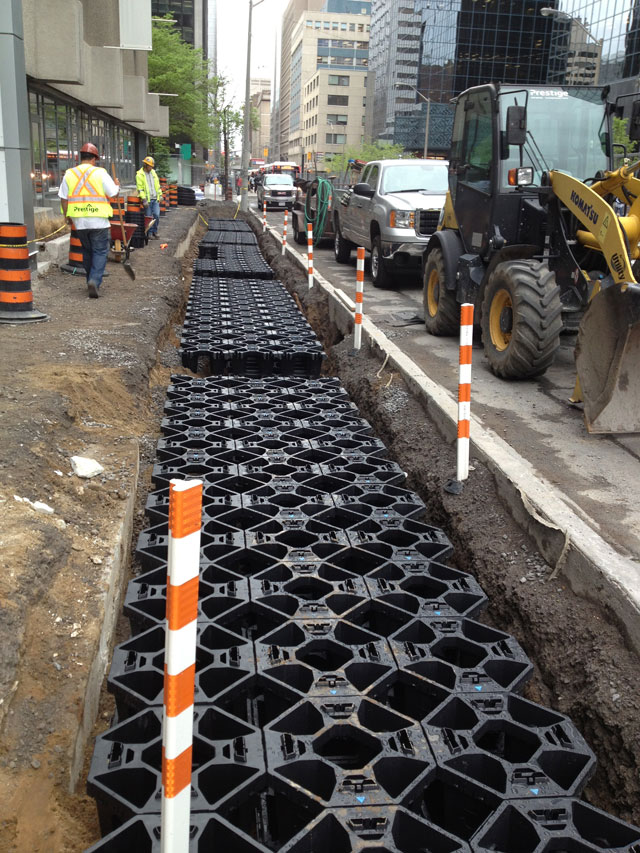 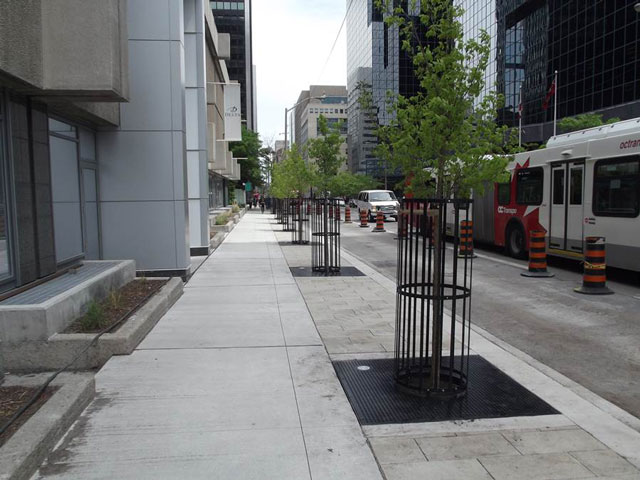 The CityGreen® modular StrataCell system® has impressed Canadian contractors after it was recently used to revamp Delta Hotel’s façade in Ottawa.

The Delta Hotels and Resorts, a leading Canadian hotel management company, unveiled its multi million dollar project, complete with interior and exterior redevelopment that included the full reconfiguration of the hotel’s public spaces.

Prestige Design and Construction Limited performed several aspects of the project including the re-construction of the streetscapes along Queen street and Albert street. This included the supply and installation of new concrete sidewalks, architectural pavers, trees and CityGreen  products such as tree grates, tree guards and the StrataCell system.

The CityGreen StrataCell supports two rows of city street trees that flank either side of the hotel tower. The exterior streetscape work for the installation of the StrataCells started in May 2013 and finished in July 2013.

Bryan Jones, lead landscape architect from The HOK Planning Group, commented the project was a “complete refresh for the Delta Hotel chain and sets a precedent for further refresh and rebranding renovations for the hotel chain across Canada”.

He confirmed that they decided to use the CityGreen StrataCell system as it was able to address several issues they were facing. “Firstly, the hotel wanted to improve the public realm around the hotel to reflect the high quality of the hotel renovations. Secondly, Ottawa experiences harsh conditions over the winter months and can experience prolonged periods of no rainfall in the summer. Urban trees are typically stressed because of these issues and the StrataCell system offered an effective solution.”

The StrataCells structural soil cells, manufactured from 100 % recycled polymer, can be assembled to form a skeletal matrix that supports pavement and traffic loads. This features almost five times more available growing media compared to the traditional rock/soil method, therefore facilitating healthy root growth. Because of its high structural integrity, these matrices can be used beneath vehicular areas.

Like with any renovation, there were unforeseen obstacles hidden from the contractors during the project.

“When excavation began for the StrataCells, the original building piles were uncovered that impeded the intended footprint of the cells by approximately 20 per cent. Since the system is flexible, the contractor was able to cut the cells to fit over the pilings making use of all the space and allowing the trees to be planted as intended,” Bryan commented.

He adds that they had to ensure that the layout for the StrataCell placement was well planned. It was important that they started with the correct placement of the first StrataCell, since all the other modules start to interlock from the first one placed.

Enzo Di Chiara, Prestige landscape contractor, agrees that this is the biggest issue that they found with the Delta project. They needed to work around the existing buried utilities in the excavation.

“The CityGreen system was extremely easy to install once the upfront planning and layout was done. The system fits very well for the overall design and application. It will work well with most projects that have buried obstructions in the excavation,” Enzo says.

“This system, in my opinion, is considerably better than other systems that we have used and it simply comes down to the ease of placement for the particular application. Overall, these types of systems are very comparable in pricing. Ease of installation will reduce the overall cost and will weigh heavily on the product selection to be used for any project,” Enzo noted.

Bryan agrees saying that the system is a good fit with the overall vision of the project. Currently, HOK is installing the CityGreen StrataCell system at a high profile hospital in Toronto.