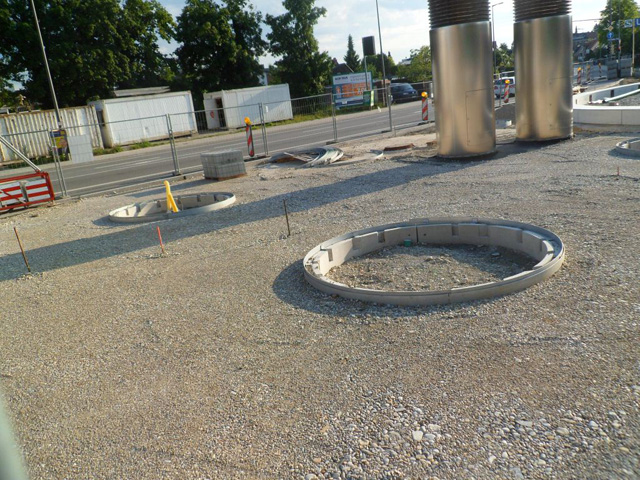 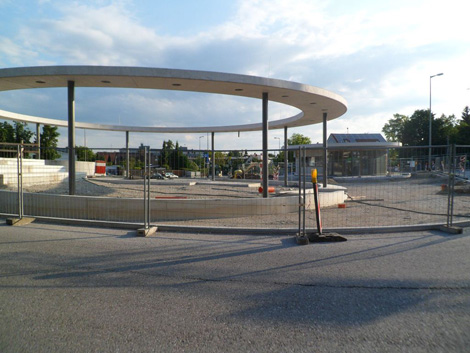 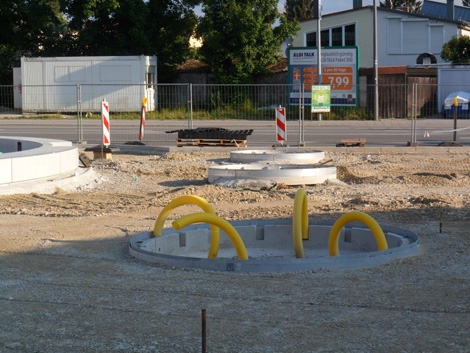 The CityGreen® modular StrataCell system® recently conquered a very tricky project in Munich, Germany, providing a stable foundation for trees despite the very shallow soil space.
The project at Memminger Place involved the redevelopment of the area around an underground train station, including a small public square, which was being renovated by the city of Munich.

Greenleaf supplied the StrataCell modules and provided technical advice on the installation during the planning phase. The project, which started in autumn of 2012, was recently completed and had an overall budget of 7.3 million Euros.

The Memminger space is an important hub of public transport in Munich. The square also provides a nice green space for passengers to relax. This is the first time that the council has decided to try out a new system for urban tree planting after using a different method for a long time.

“The city of Munich has had a standardised system for planting trees for around 10 years, which consists mainly of compactable substrate. However, the experience with this method has not been all 100 per cent positive, especially as this type of substrate is very free draining and involves fairly intensive watering, even after the tree is established. They decided to use the StrataCell system as a trial to compare the results beside trees planted with their existing system,” said Warren Myatt from Greenleaf.

Warren said several trees were planted with their standard method of compactable substrate and the Munich council decided to use the opportunity to trial the StrataCell system alongside and compare the trees’ development over the years.

For the project, StrataCells were used in two layers and ArborVent aeration pipes were also installed.

He said there were no real problems during the project. The only unusual thing was the fact that the tree pits were only very shallow as the concrete roof of the underground train station was directly below.

“This was solved by installing the StrataCells in two layers and bringing the whole construction relatively close to the surface,” Warren said. “The weight loadings were also an issue but they were ironed out along the way.”

Warren said that although they were not present when the StrataCells were installed, they received feedback from the city council confirming that everything went very well and no difficulties were reported.

“The installation was very simple and easy. In fact, the contractor did not come back to us with any questions or queries at all,” Warren said.

He added that although the system appears to be more expensive than the compactable substrate, the price wasn’t a huge consideration in the project. The council was more interested in finding the ultimate load-bearing tree pit. (As in previous projects where the StrataCell system was involved, the difference in cost was easily recovered in the long-term advantages of using the system.)

After the Memminger Place was completed, Warren noticed that the StrataCell system fits well with the overall design, especially as the area where the trees were planted did not allow for large open areas for the trees. Something had to be done so that the root zone was underneath the paving.

“The StrataCell system allows the tree space to grow, at the same time allowing the area to be paved over relatively close to the trunk. They used a large cast tree grille as standard so this was easily installed above the StrataCell construction,” Warren said.

Although it’s still too early to compare the trees, Warren said they are looking forward to the comparisons between the trees in StrataCells, the trees in compactable substrates as well as the trees planted in large, open areas with no special soil requirements. The results will help convince the city of Munich to replace their current standard system and continue to use the StrataCells in the future.