YOUNG LEADER OF THE YEAR 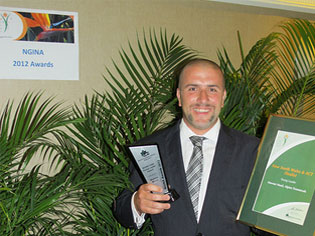 Maroun Maait from Alpine Treemovals was named NSW Young Leader of the Year at the Nursery & Garden Industry NSW & ACT (NGINA) Awards, which were held November 11 at the Epping Club in Sydney.

Maroun (or Morrie as he is popularly known) was chosen as one of six finalists in the new national Young Leader Development Program. This will culminate in the national winner being announced at next year’s annual NGIA Conference on the Gold Coast in March. Read more about the 2012 NGIA Conference here: http://www.outdoordesign.com.au/industrynews/detailarticle/0513

The Young Leader Award seeks to identify, recognise and reward the outstanding achievements of individuals in the Nursery & Garden Industry, who display exceptional commitment and passion towards their business, the industry and leadership potential for association and industry schemes. It is open to all industry employees and employers under 35 years of age at the time the awards entry closes.

Established in 1986, Alpine Treemovals is situated over two sites with a combined area under production of 130 acres, specialising in container trees and mature in ground specimens, with container stock varying in size from 150L to 2000L and up to 10 meter ex-ground mature specimens.