Zaha Hadid Architects has been appointed by the Mayor of London to help develop plans for a major new airport in the southeast of England. 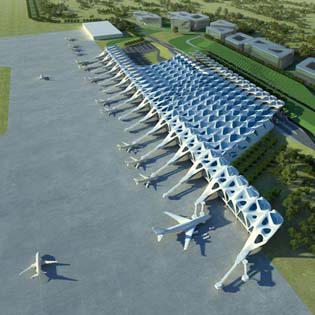 Zaha Hadid Architects has been appointed by the Mayor of London to help develop plans for a major new airport in the southeast of England. Hadid's firm will work alongside UK-based engineers Atkins and Pascall+Watson as well as a number of experts to solve the nationa’s aviation crisis. 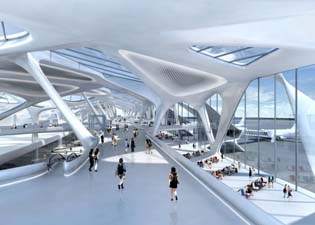 The three engineering firms on the project bring together a wealth of experience to work on the airport design and infrastructure.

Atkins is one of the world’s leading design, engineering and project management consultancies who worked on the London 2012 Olympics, Bahrain World Trade Centre and the Dubai Metro.

Zaha Hadid was awarded the Pritzker Architecture Prize in 2004 and is internationally renowned for her theoretical and academic work. Time Magazine included her in their 2010 list of the 100 most influential people in the world. She has worked on globally celebrated projects such as the London 2012 Aquatics Centre and Guangzhou Opera House in China.

Other world-class experts who will assist the team on socio-economic impacts, commercial viability and legal and regulatory issues include:

Ramboll - A leading international engineering and management consultancy.
Oxford Economics - A world leader in global forecasting and quantitative analysis.
York Aviation - A leading firm specialising in the assessment of the economic impacts of aviation.
Professor Peter Tyler – A professor in urban and regional economics in the Department of Land Economy, University of Cambridge.
Ernst and Young – A global leader in assurance, tax, transactions and advisory services.
Ashurst – A leading global law firm, which specialises in advising corporates, financial institutions and governments.

Zaha Hadid said that the new airport “will enable London to maintain its position as one of the world's most important economic, commercial and cultural centres, outlining the city's future growth and development, which has always been founded on global connectivity."