WHAT'S THE STORY OF THIS STUNNING HERITAGE GARDEN?


What was once an unsightly car park at the Royal Exhibition Building in Melbourne has today been transformed into heritage gardens based on original 19th century designs. 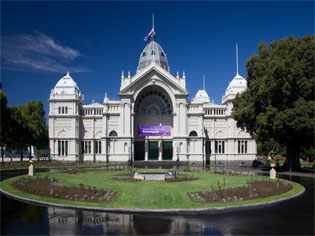 What was once an unsightly car park at the Royal Exhibition Building in Melbourne has today been transformed into heritage gardens based on original 19th century designs. 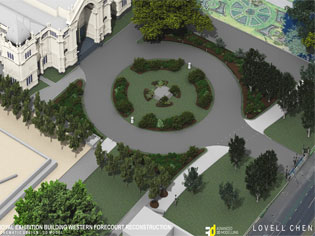 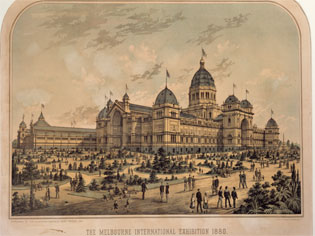 The major project, undertaken by Museum Victoria, began in October 2009. Extensive work was required to restore the original gardens at the western forecourt of the World Heritage listed Royal Exhibition Building, which was asphalted in the 1950s to build a car park.

Over a year later, the final phase of the project is complete with the installation of gardens and landscaping based on 1880s designs. A key feature of the newly restored garden landscape is a water harvesting system and vast 1.3 million litre underground storage tanks.

According to Dr Patrick Greene, Museum Victoria CEO, “The redevelopment of the western forecourt of the Royal Exhibition building is one of the largest projects ever planned and produced by Museum Victoria, in collaboration with a number of partners. What was once a bleak area of tarmac has been turned back into a grand forecourt that is in keeping with one of Australia’s most significant historic structures.”

“In most great cities there is a building that epitomises its spirit and history. In Melbourne, it is undoubtedly the Royal Exhibition Building”, added Dr Greene. “The completion of this significant project ensures a sustainable future for this magnificent landmark, and the Carlton Gardens, preserving them for future generations.”

The first phase of the project involved an archaeological exploration of the site to search for traces of the historic garden beds and other original features, conducted in partnership with Godden Mackay Logan (GML) and La Trobe University. The dig revealed evidence of the original landscape design, including paths and a circular driveway, as well as the footings of a kiosk that originally stood in the centre of the garden.

After the archaeological dig, the water harvesting and storage system was installed, including two underground tanks - one for water captured from the extensive roof of the Royal Exhibition Building, and the second for surface water run-off from hardstand areas. This important component of the project provides a constant water source for the fountains, lakes and irrigation of the Carlton Gardens as well as irrigation for the site’s historic trees, flower beds and newly created palace garden, ensuring a sustainable future for this Melbourne landmark.

In completing the redevelopment of the western forecourt of the Royal Exhibition Building, Museum Victoria commissioned heritage architects Lovell Chen and landscape designers CDA Design Group to design the garden. The designers used archaeological evidence as well as historical photographs, postcards, archival drawings, plans and other sources to restore the 1880 garden landscape and plantings to their original splendour. The Royal Exhibition Building’s western forecourt project was made possible through a $5.3m grant from the Victorian Property Fund.

According to landscape garden designer Barrie Gallagher from CDA Design Group, “the restoration process included aerial photographs and postcard photos as well as documents that listed the plants that were available in Victoria at that time.”

“We went to several nurseries to source the plants and were surprised we found as many as we did, including Sacred Flower of the Incas (Cantua baxfolia), a deep pink tubular flower that looks quite spectacular,” he said.

What's the story of this stunning Heritage Garden?
Universal Magazines