US based Architecture firm NBBJ has revealed conceptual plans to transform the London Underground’s Circle Line into a moving walkway for commuters. 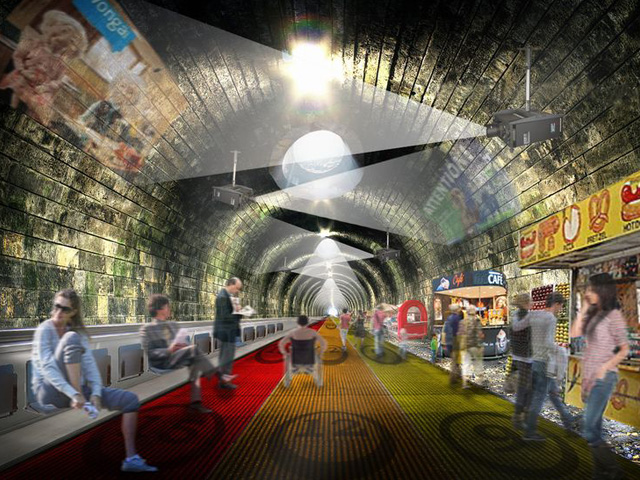 Architecture firm NBBJ has proposed replacing the trains of London’s Underground Circle Line with a system of moving sidewalks. The Circle Line is one of London's oldest subways, started in 1863. Unlike other London lines, it is fairly shallow and close to the surface. The route, which carries 114 million people along its 17 miles of track each year, is one of the city’s most congested and is often subject to delays.

Commuters would enter at the slowest speed of 5kph and slowly increase their pace by stepping onto adjacent walkways, up to a top speed of 24kph. When added to an average walking pace of 5kph, pedestrians would actually move faster on foot than today’s Circle Line trains, which must stop for boarding at each station.

The design team claim the scheme would result in considerably quicker, more enjoyable and healthier journeys. Intended to promote new ideas for urban mobility, the scheme was developed with a view to inserting an element of fun into traveling on the underground, for tourists and Londoners alike.

It will be interested to see how this clever idea works in reality – once you add the humans!