Two electric car charging stations in Denmark have been constructed from timber to set them apart from the typical concrete structures and create a “restful and Zen-like feel”. 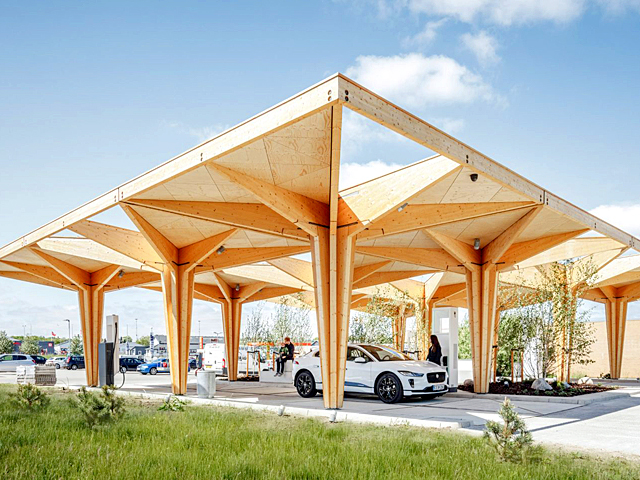 Completed as the first of a network of 48 charging stations being built along Scandinavian highways, the structures were designed from natural materials to create a different experience than in traditional petrol stations.

"When designing the project, we first looked at traditional gas stations – characterised by noise, odour and bright commercial neon signs," Cobe founder Dan Stubbergaard said. "Then we asked ourselves, 'what would a charging station for [electric vehicles] look like, using only natural materials, natural daylight, and designing it to recharge the batteries of both vehicles and drivers?'"

The charging stations in the cities of Fredericia and Knudshoved in central Denmark were both built using the same modular, timber tree-like structure.

In Fredericia, the shelter covering the charging station was made from 12 connected trees supporting a large roof, while in Knudshoved two independent trees cover the pumps. 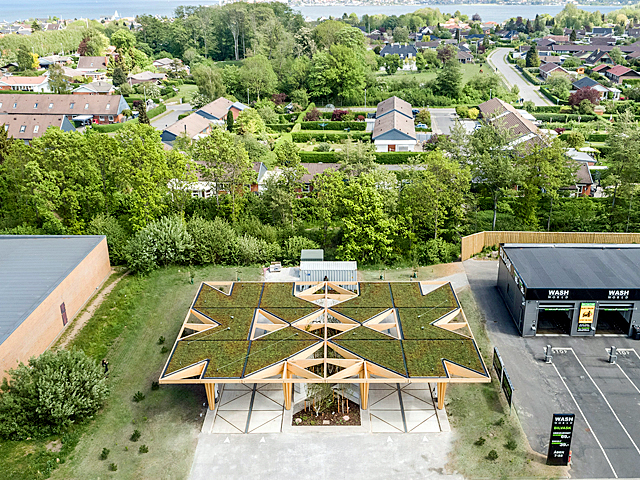 Cobe's charging stations resemble the forms of petrol stations due to the fact they perform a similar function, however, the studio wanted the architecture to represent the more sustainable nature of electric transport.

"The energy and the technology are green, so we wanted the architecture, the materials and the concept to reflect that," said Stubbergaard.

"What if a charging station could have reminiscences of a tree crown that filters light and offers shade? The design concept consists of an assembly set of canopies, each symbolising a tree – with a 'trunk' and a 'crown'. The 'trees' can be free-standing or assembled into a 'grove'."

To create this more natural environment, Cobe created a modular system of timber components that could be adapted to numerous sites and easily assembled, demounted, upcycled and reused. Along with creating a timber structure, the studio added trees, grass and planting into the station, which is also topped with a green sedum roof. 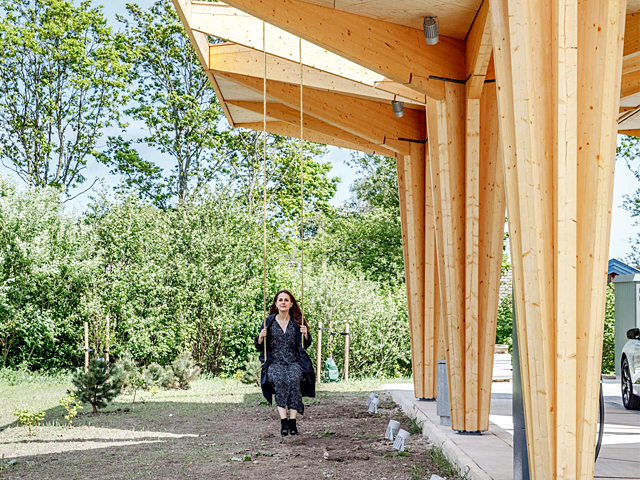 "We decided from early on to reject artificial materials, poisonous paint and lacquer, and asphalt, in favour of natural and honest materials," said Stubbergaard. "We wanted to create a green structure, that matches the green energy. Therefore, the station canopy is built in certified wood," he continued.

"Timber is the only renewable building material that actually absorbs CO2. At the same time, timber has a warmth and tactile quality that is lacking in today’s infrastructural environments."

Creating a pleasant place to spend time was a core concern as charging an electric car takes much longer than filling up a vehicle with petrol.

"We wanted to create a meaningful mental break for people to recharge their own batteries when they are on the move – a non-commercial green space with a pleasant, restful and Zen-like feel, where you can pick your own strawberries while your kids play by the swing," added Stubbergaard.

Cobe is an architectural firm based in Copenhagen, which was founded in 2006 by Stubbergaard. Recently in the city, the studio has completed a wedge-shaped library for a school, an elevated Metro station and an undulating public square. 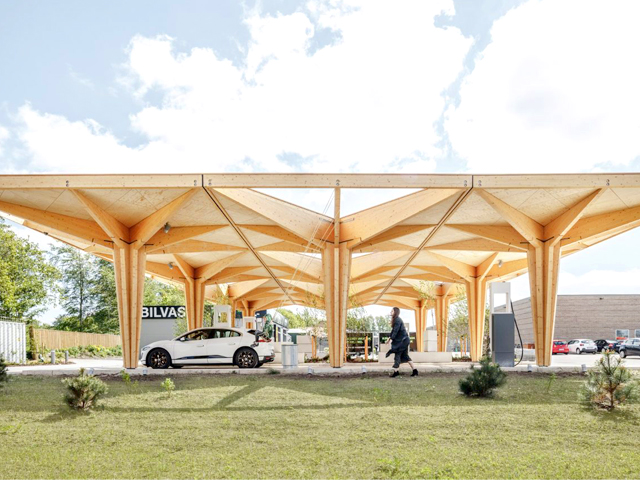