THE ONLY WAY IS UP


A former meatpacking plant in an industrial area of Chicago is being converted into the city's first vertical farm! 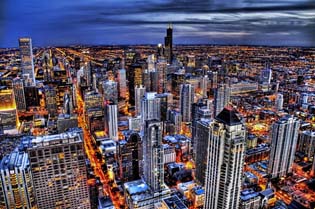 A former meatpacking plant in an industrial area of Chicago is being converted into the city's first vertical farm!

"The Plant" will be a three-story zero-energy, zero-waste, closed loop farm, an incubator for food businesses, a research facility and educational space. It's already growing greens, mushrooms and kombucha and will soon brew beer in a 12,000 square foot space, as well as raise tilapia. The farm should be fully operational by 2016.

The 93,000 square foot building is completely energy independent. An anaerobic digester turns 27 tons of daily food waste into methane, which feeds a combined heat and power (CHP) system that provides cooling, heat and steam for electricity.

The aquaponic system is equally efficient, combining aquaculture (the tilapia farm) and hydroponics (growing plants in water instead of soil).

Plants clean the fish's water and produce oxygen, which is used in making Kombucha.

And the community gets a source of local, fresh organic food. The Plant even collects organic waste from nearby businesses, reducing the load for the city.

The Illinois Department of Commerce and Economic Opportunity gave the project a $1.5 million start-up grant.

The only way is up
Universal Magazines