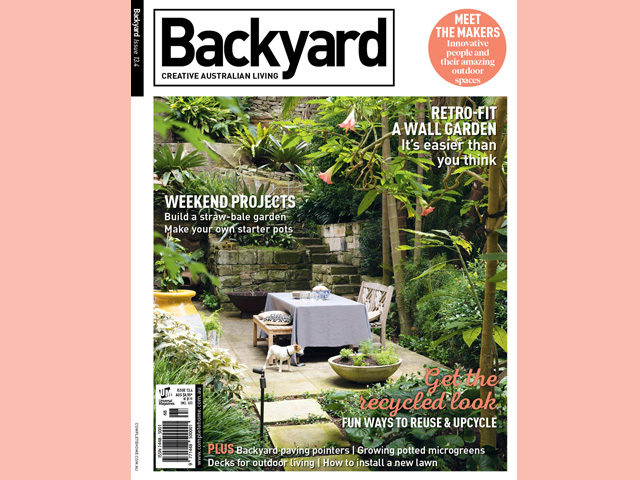 It’s new, it’s cool … and it’s targeting a much broader audience of Australian families. The new look Backyard Magazine is coming your way! 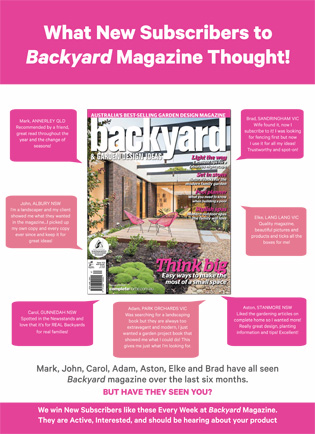 Backyard Magazine targets aspirational families who are at a stage of life when life is LIVED in the backyard. As the tag-line implies, this magazine offers ‘Creative Australian Living’ at its best. It is readily accessible for Australian families, offering a range of stunning projects and things to do.

Backyard is created by Australia’s only landscape category publisher. At a time when only gardening magazines were available, Universal Magazines invented the ‘landscape’ category, and have nurtured this into a range of magazines and numerous special editions over the last 18 years.

Backyard’s target market is suburban-living aspirationals. With mass-market appeal, Backyard is suitable for any mid-market family/couple in their thirties, forties or fifties.

This magazine is for people like Carol from Gunnedah, NSW , who is, “searching frantically, as I promised my son a tree house ... plus I want a new decking area in the next 4-5 months.”

Universal Magazines understand if you are living the family life, then you are MOTIVATED to do things in the backyard. Backyard Magazine is therefore being relaunched to provide ideas, inspiration, comraderie, and access to the products and services needed to turn backyard dreams into a reality.

“Our readers are DOING STUFF, and our new look Backyard Magazine will help us to find more”, says Janice Williams, Publisher at Universal Magazines.

Mark from Annerley, QLD, is “looking to add screening this summer that matches my barbeque area…”. Adam from Park Orchards, VIC, says, “Our garden needs work, so we are looking for a rustic, bush feel design, and want a landscaping overhaul in the next 3 months”. Aston from Stanmore, NSW, “is trying to create an escape retreat full of foliage and garden art… looking for ideas and buying now…”.

With a lot planned for the relaunch of Backyard, this magazine is the place to be to target the right audience for the best products and services.  Universal will be launching new social media campaigns, with a massive push on digital taking place. In a bid to expand readership, great subscription deals are on offer, and poster giveaways and merchandising will be available at top retail outlets (Newslink, WH Smith, Woolworths and Bunnings). Backyard will be available bimonthly, with a range of specials released with each edition.

Read on for the latest research into home and garden movements in the consumer market.

It is what’s on the outside that counts when it comes to home renovations, according to consumer ratings house, Canstar Blue, who today unveiled their annual home and garden research.

The study found that Aussies are going crazy for paving, with one quarter of homeowners having paved, decked or painted their outdoor living area over the last three years, making it the most renovated area of the house.

The Canstar Blue research surveyed more than 2500 people and asked about the renovations people have undertaken, as well as their future intentions. One quarter (25%) of the 1503 respondents who own their home have beautified their backyards over the last 3 years, and a further 38 per cent who haven’t yet renovated their outdoor space are considering, or intending, to do so.

Bathrooms were the second most popular renovation to undertake, with one in five (20%) homeowners reporting having made improvements over the last three years. Of those who had not renovated their bathroom, two in five (40%) have an intention to spruce up their bathroom.

Amy Partington from Canstar Blue commented, “In the Australian climate our outdoor living areas are often as important as indoor spaces and the harshness of the climate means that we can’t afford to neglect maintenance. The Canstar Blue website shows that the satisfaction ratings for outdoor items like lawnmowers and exterior paints are extremely popular as consumers seek advice from their peers about which products they should consider in their DIY and garden maintenance.”

Other findings from the research:

Homeowners in the sunnier climate of Queensland were most likely to have renovated their backyard (29%) versus just 17% in Tasmania and West Australia.

The most popular work undertaken in the garden was flooring such as decking or paving (45%), repainting (38%) and changes to the lighting (32%).

In the bathroom it was the taps and sink which were likely to be upgraded (72% of renovators), followed by repainting (69%) and then replacing showers and baths (66%).

Gen Y homeowners were most likely to be doing their own heavy lifting – almost half (47%) said that they did all the renovations themselves, compared to 40% of Baby Boomers and 41% of Gen X.

Amy Partington from Canstar Blue concluded, “We conducted the research to get a nationwide picture of the renovation projects that Aussies are undertaking and the research shows that there’s very little that’s off limits for our nation of eager renovators.”