THE GREENING OF SYDNEY


Rooftop gardens and green walls are the latest thing being pushed across the Melbourne and Sydney central business districts. 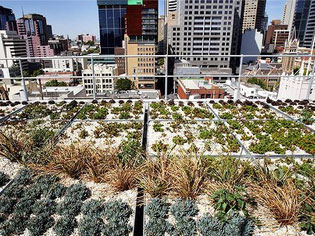 Rooftop gardens and green walls are the latest thing being pushed across the Melbourne and Sydney central business districts to make them more attractive to workers, residents and visitors.

While some may see the idea as just creating more elaborate outdoor smoking venues - which is not the plan - office and residential building landlords are embracing the idea as part of their sustainability platform.

One of the key issues for owners has been security and safety as most roofs are the end point for air conditioning ducts and now technology antennas. But the cities of Melbourne and Sydney are both issuing new development policies and guidelines, aimed at encouraging the conversion of a rooftop as well as integrating ''green walls'' into the office.

There are already 49 approved green roofs in the City of Sydney area, ranging from simple planter boxes to a 2600-square-metre roof garden at the MCentral apartment building in Harris Street, Pyrmont.

There is also an extensive garden on the roof of 242 Little Collins Street, Melbourne. It is expected that as more properties are developed in the Docklands area, more green walls and gardens will be incorporated in the design.

Green walls are located at 14 sites across Sydney city, including Australia's largest - the nine-metre- high and 40-metre-long installation at the six-green-star-rated 1 Bligh Building.

The City of Sydney Council will undertake a number of studies on green roofs and walls in Sydney to assess public attitudes, costs and benefits and source potential new locations as part of establishing a formal policy. It will also set up a strategic advisory panel to help develop the policy.

Sydney lord mayor Clover Moore said green roofs could be simple additions to existing buildings or new projects that have the potential to greatly increase the amount of recreational space in the city.

Image: the rooftop garden of the City of Melbourne office building in Little Collins Street.

(This article, by Carolyn Cummins, appeared in the Sydney Morning Herald, July 5).

The greening of Sydney
Universal Magazines