The newly proposed 'Green Line' will turn New York’s famous Broadway into a 40-block public park that connects a number of the city’s central hubs and provide a much needed solution for stormwater management. 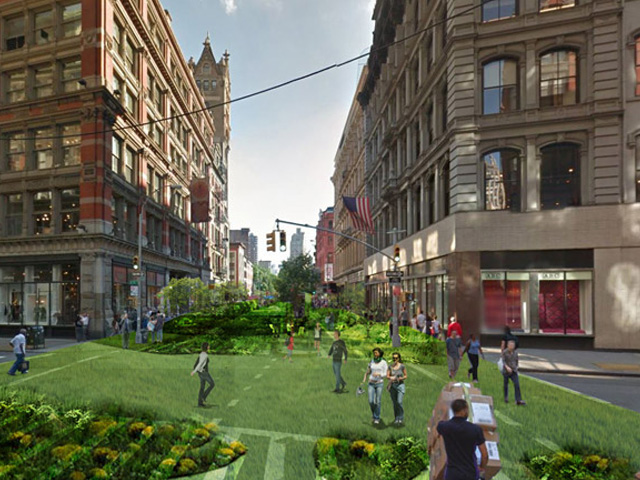 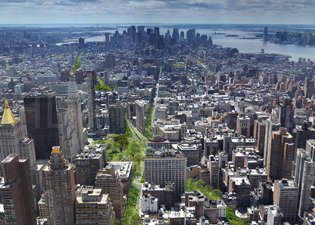 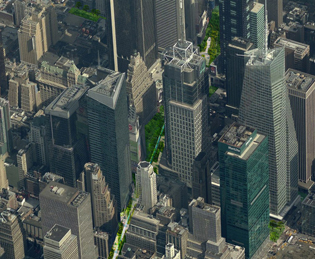 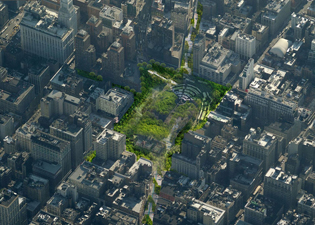 The Green Line would create a more than 40-block long park for pedestrians and cyclists that would connect many of the city's famous public spaces, including Union Square, Madison Square, Herald Square, Times Square, and Columbus Circle.

According to Perkins Eastman, emergency vehicles would be permitted to use the green route as a shortcut through the city, but cars and trucks would otherwise be banned.

It is the latest in a string of proposals for turning existing city infrastructure into parkland following the success of the High Line, which was built on disused elevated railway tracks. Recent examples include the Lowline underground park below the streets of Manhattan's Lower East Side.

Unlike most of these proposals, which largely focus on derelict spaces and structures, Perkins Eastman's concept is for one of New York's central roads. Broadway is a unique avenue in Manhattan's street grid, cutting across much of the island on the diagonal, creating breaks in the city's plan for public squares.

"Recognising that green public space is at a premium in the city, and proximity to it is perhaps the best single indicator of value in real estate, the Green Line proposes a new green recreational space that is totally integrated with the form of the city," said Perkins Eastman principal Jonathan Cohn.

"As a linear at-grade park, the Green Line would provide much needed active and passive recreational space in the heart of the city."

The proposal builds on recent pedestrian and cyclist improvements implemented along Broadway by the previous mayoral administration of Michael Bloomberg. These include a protected bike lane running the length of the street, which has already reduced vehicle traffic, and the closure of Times Square to cars – part of a redesign by architecture firm Snøhetta.

According to the architects, the Green Line would also help Manhattan manage its drainage system by removing a large strip of tarmac, allowing water to be absorbed into the exposed soil instead of needing to be channeled away.

Broadway currently marks an important point in the city's overburdened stormwater drainage system. West of Broadway, stormwater overflows drain into the Hudson, while to the east, the effluent is discharged into the East River.

"It is an excellent swath to begin groundwater recharge," said Cohn. "Rather than allowing stormwater to enter the underground sewer system, where during heavy rain and snow storms it combines with untreated wastewater and discharges directly into the city's waterways, much of the rainwater could be allowed to percolate directly into the earth."

The Green Line would use a combination of permeable paving stones, bioswales – landscape features designed to filter silt and pollution from rainwater – and plants to help manage runoff.

Based on the success of the High Line, the designers argue the proposal would increase property values and therefore would pay for itself.

"The success of the High Line in providing a new destination park that encourages private investment in surrounding areas is an important precedent," said Cohn. "Unlike the High Line, the Green Line proposes a linear park that is seamlessly stitched into the urban fabric, providing for more immediate value-leveraging for associated buildings and their users."