It could easily be mistaken for an art installation, but it’s actually a ‘Smog Free Tower’. These towers act as massive smog vacuum cleaners, purifying the air in congested urban environments. 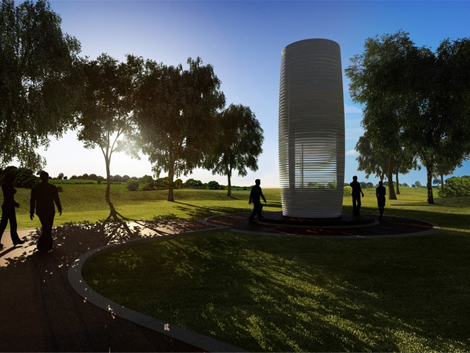 It could easily be mistaken for an art installation, but it’s actually a ‘Smog Free Tower’. These towers act as massive smog vacuum cleaners, purifying the air and producing smog free bubbles of public space that allow people to breathe and experience free, clean air. 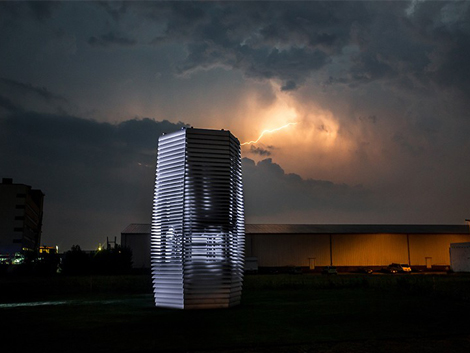 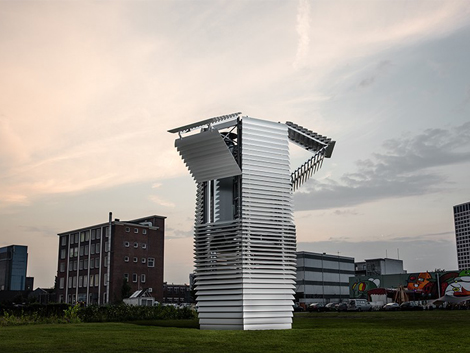 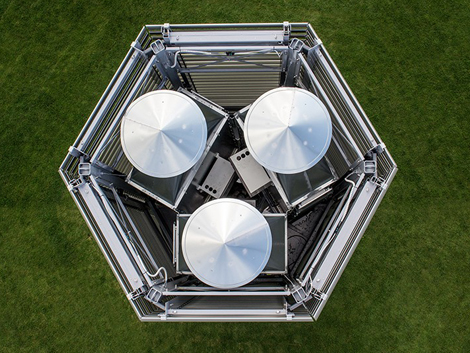 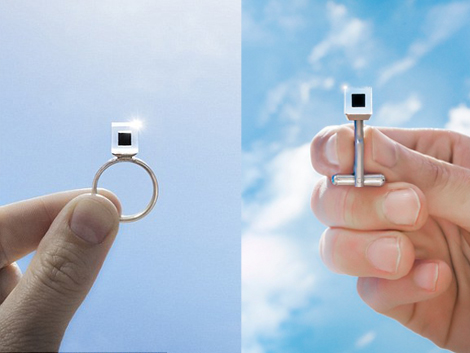 The 7m x 3.5m meter tower is capable of sucking in and purifying 30,000m3 of air per hour. It uses no more electricity than a water boiler (1400 watts) and runs completely on sustainable wind energy through a radial ventilation system located at the apex of the tower.

The Smog Free Tower removes particulates from the air through a process of ionization. Air is sucked in via the wind-powered radial ventilation system and enters a chamber where microscopic smog particles measuring less than 15 micrometres are given a positive charge. Scientists have proven that airborne smog particles under this size threshold pose the greatest threat to human health, as they are small enough to be inhaled and cause damage to the respiratory and coronary systems.

Once the particles are imbued with a positive charge the tower then removes them from the air using a grounded counter electrode, and expels the resulting clean air via vents at its base. This process doesn’t produce ozone like other ionic air purifiers because it uses positively charged particles instead of negative ones.

The result is a microclimate of clean air within the immediate vicinity of the tower, as well as cleaner air in the broader environment if a sufficient number of the structures are permitted to operate simultaneously for long enough periods.

In an unusual and innovative twist, Roosegaarde studio has also used the Smog Free Tower to create jewellery from the collected smog particles, to ensure that nothing goes to waste. The tower creates the jewellery by compressing the smog particles into cubes and mounting them in rings and cufflinks. Each cube contains the smog collected from 1000m3 of air. Roosegaarde estimates that, in areas affected by severe air pollution, the Smog Free Tower will be able to produce over 3500 cubes a day.

The Smog Free Tower Project is not intended to just stay in Rotterdam. Roosegaarde plans to take his tower to cities with some of the worst smog in the world. Along with governments, NGOs and clean tech industries, Roosegaarde has already scheduled the tower to visit Beijing and Mumbai. “I’m tired of waiting for policies” explains Roosegaarde. “I want to fix the problem now.”