A walkway that reaches heights of 12 metres above the forest floor in South Africa, has been described more like a ‘sculpture’ than a structure. 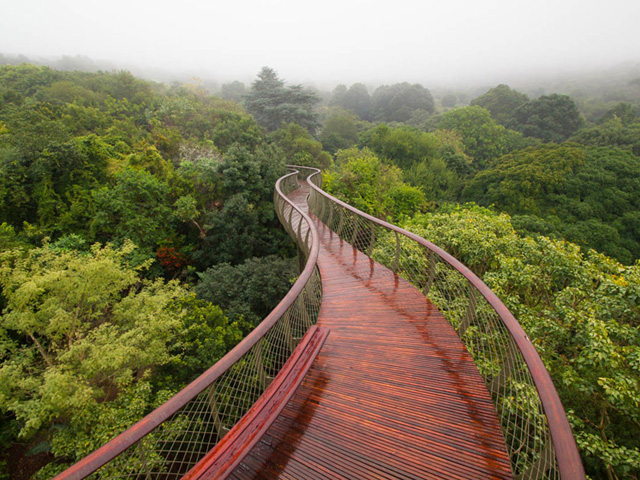 A sinuous wooden walkway that meanders through the treetops of a botanical garden on the eastern slopes of Table Mountain in South Africa has just been completed. 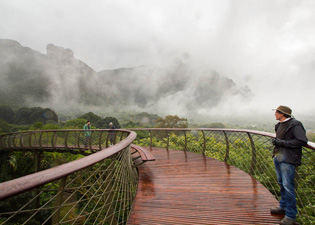 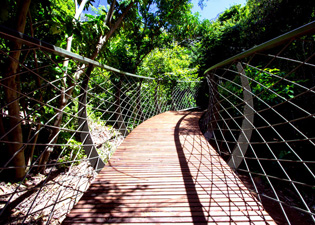 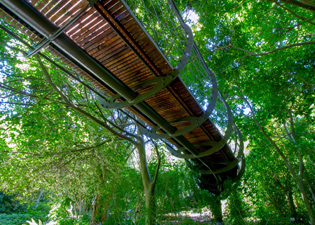 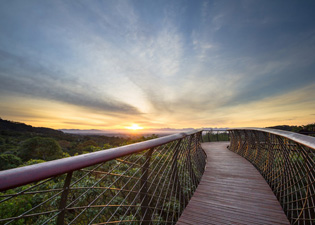 The project was initiated to celebrate the centenary of the Kirstenbosch National Botanical Garden in 2013, and was developed by Cape Town architect Mark Thomas and engineer Henry Fagan as a permanent attraction that provides a different vantage point of the garden's arboretum.

The walkway is called Boomslang, after a species of venomous sub-Saharan African snake, and follows a roughly crescent-shaped path across the undulating terrain of the site. From concrete launch pads at either end of the plan, the path rises gradually along its 130 metre length, in places reaching a height of 12 metres above the forest floor.

Deep concrete foundations anchor 10 steel columns, supporting galvanised steel components that were laser cut and fabricated off site, before being transported to the gardens and craned into place.

The position of the columns and the route of the walkway was determined by the location of key trees within the arboretum and the need to minimise disruption to the delicate ecosystem of the forest floor.

"It's more of a sculpture than a structure that we created," said Fagan. "We started with what was structurally needed and [tried] to limit that to the minimum. It's a single frame with ribs that form the hand railings."

A round pipe fixed to the tops of the columns forms a spine from which ribs curve upwards to support the decked walkway. The ribs also create stanchions for the handrails and the mesh side walls. The decking is made from stained pine battens, with sustainably harvested Paduak wood from West Africa used for the curving handrails. Holes have been cut in the decking at one point to accommodate existing trees that emerge through the surface.

To encourage the forest to colonise the structure and help it blend in with the natural environment, a special paint that attracts algae was applied to the galvanised steel surfaces. The columns are also surrounded by a trellis that will eventually be covered by climbing plants.