Soon to become a fixture of the future, Algae powered oxygen bars are designed to recharge and refresh you using a symbiotic respiratory relationship that will provide purified air in a quiet sanctuary within an urban environment. 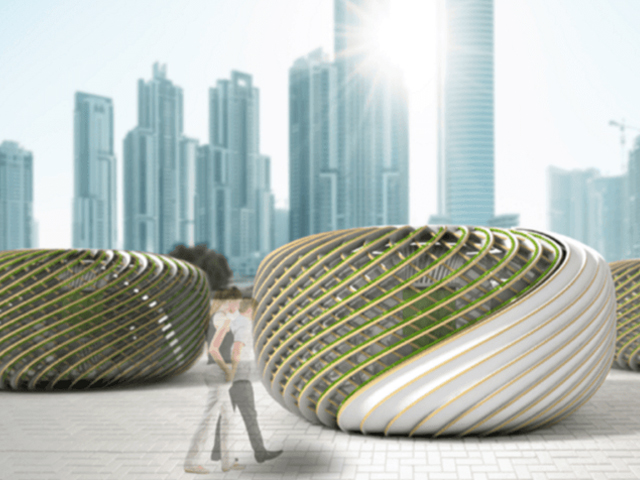 Take a deep breath... are you ready for this? Algae-powered oxygen bars could be headed your way in the near future. Sometimes when you’re tired or stressed, what you really need is a breath of clean, fresh air. That was the inspiration for designer Adam Miklosi when he created his Chlorella Pavilion, a futuristic, basket-shaped oxygen bar that uses the purifying power of algae to suck CO2 out of the air and rejuvenate it with oxygen. 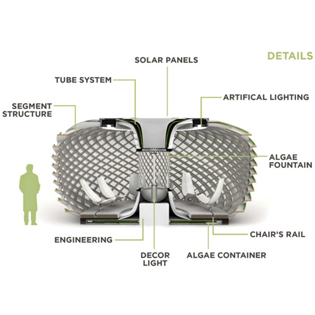 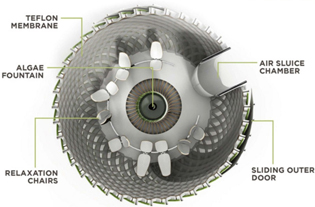 The structure is built with moulded beech wood, and contains living algae pumped through the core and exterior of the pod in a swirling “algae fountain”. Temporary visitors would get the chance to experience symbiosis with the algae, sharing their exhaled CO2, which the algae needs to survive, and breathing in the oxygen respired by the algae.

While the idea may seem strange at first, these pods could actually be the answer to the increasing problem of urban pollution and carbon emissions. The World Health Organization predicts that by 2030, 60 percent of the world’s population will live in big cities, and a recent study from WHO found that a staggering 92 percent of the human beings on the planet are already being exposed to unsafe levels of air pollution. That’s a lot of people who could benefit from a quick daily dose of purified air.

The design of the structure does more than simply purify the air. It also uses semi-transparent Teflon membranes to reduce noise and visual stimulation – creating a quiet, isolated escape for tired visitors who want to relax and recharge. The algae fountain in the centre consists of a series of photobioreactors filled with five cubic meters of water and algae.

Surrounding the core photobioreactor would be ten rail-bound relaxation chairs placed in a circle, to allow quiet time for study and reflection – it’s sort of an oxygen bar meets library. The chairs can be shifted individually in order to facilitate social gatherings or to create a more private personal space.

An urban escape from pollution wouldn’t be the only benefit to this design. We could also harness elements of this design to help reduce overall atmospheric CO2 – a pressing issue at a time when existing carbon sinks worldwide are disappearing. Deforestation could potentially lead to a massive increase in unabsorbed carbon dioxide pollution.

Researchers predict that deforestation in the Amazon, has already led to a 12% increase in carbon emissions worldwide since the 1960s, and that will only increase as farming and logging continue in the region. Environmental changes such as drought have severely impacted the ability of trees to store carbon and have even caused them to release it into the atmosphere instead.