The desire to develop cleaner and more efficient ways to keep cities running is spurring urban planners to look for unconventional solutions. 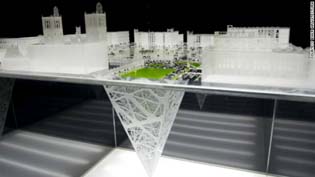 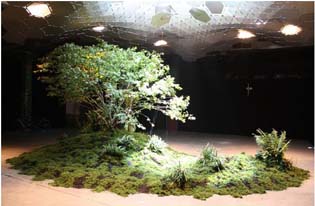 The planet probably won’t become dramatically more sustainable as a result of what happened at the U.N. Conference on Sustainable Development in Rio de Janeiro. Yes, lofty speeches were delivered and hundreds of billions of dollars of pledges were made, but the chance of a meaningful climate change treaty coming out of one of these events is now none and noner.

Yet one thing that has become painfully clearer with each passing U.N. climate summit is that the key to sustaining life on Earth is to get smarter about how we develop and reshape cities. Today, more than half of the world’s population lives in urban areas; by mid-century it will be closer to three out of four people.

The need to find more space, along with the desire to develop cleaner and more efficient ways to keep cities running, is spurring urban planners to look for unconventional solutions. And they’re finding that more of the answers may be beneath their feet. It’s a big shift. As Leon Neyfakh wrote recently in the Boston Globe: “In a world where most people are accustomed to thinking of progress as pointing toward the heavens, it can be hard to retrain the imagination to aim downward.”

But cities around the world are adjusting their aim; the underground is becoming the next urban frontier.

Here are a handful of projects pushing the possibilities:

1) When there’s no place to go but down: The showpiece of all the potential underground projects is a 65-story inverted pyramid known as the “Earthscraper.” Instead of reaching for the sky, it would burrow 1,000 feet into the ground beneath Mexico City’s main square, the Zocalo. Taking an elevator 40 floors down into the Earth may not sound like anyone’s idea of an awesome way to start the day, but it can be much better than it might seem, insists architect Esteban Suarez, of BNKR Arquitectura, who imagined this plan.

As he sees it, the Zocalo plaza would be covered with glass that would serve as the building’s ceiling. The Earthscraper’s center would be left as open space to allow natural light and ventilation to flow through each floor. And every 10 floors, there’d be an “Earth Lobby” of plant beds and vertical gardens to help filter the air down there. Suarez envisions the first 10 floors nearest the surface as a museum, with the next 10 down reserved for condos and shops and the next 35 floors designed as office space. The Earthscraper faces a lot of challenges, including an estimated cost of $800 million, and plenty of skeptics think it will be true its vision and never see the light of day. But urban designers are keeping an eye on this one to see if it’s the project that moves cities in a whole new direction.

2) When progress means going back into caves: The hands-down leader in plumbing the possibilities of subterranean life is Helsinki, the only city in the world that actually has a master plan for underground development. The Finnish capital sits above bedrock close to the surface, which has allowed it to start building out another city beneath itself. It’s carved through the rock to create an underground pool, a hockey rink, a church, shopping mall, water treatment plant and what are known as “parking caverns.”

But the most innovative feature of this netherworld is, believe it or not, a data center. Usually, data centers are energy hogs, burning up massive amounts of power to keep machines from overheating. Not under Helsinki. There the computers are kept cool with sea water, and the heat they do generate is used to warm homes on the surface. Both Singapore and Hong Kong are looking to follow Helsinki’s lead in moving the unsightly parts of urban life–treatment plants, garbage transfer centers, fuel storage depots, data centers–into underground caverns.

3) When cities suck, but in a good way: The small, but fast-growing city of Almere in the Netherlands has become a model for cities dealing with the mountains of garbage they generate every day. For years Almere has whisked away its trash through a network of underground suction tubes, but more recently it has added litter cans to the system. The bins automatically drop their trash into the vacuum tubes once sensors indicate that they’re full. So the litter never overflows or ends up in piles that make only the rats happy.

A similar underground trash suction system, also designed by the Swedish firm Envac, has been handling garbage from New York’s Roosevelt Island for years and now feasibility studies are underway to see if it can be extended to serve the Chelsea neighborhood of Manhattan and Coney Island’s boardwalk.

4) When a walk in the park gets really deep: Among the many things most people couldn’t imagine doing underground, having a picnic likely would be high on the list. But that hasn’t deterred two innovative thinkers, Dan Barasch and James Ramsey, from pushing for the creation of New York’s first underground park. Their idea is to take a dank, subterranean trolley terminal that’s been abandoned since 1948 and turn it into a place where people can stroll under Delancey Street on Manhattan’s Lower East Side.

The key to making this work, says Barasch, is using the latest fiber-optic technology to direct natural sunlight into the space–enough sunlight, he insists, to grow grass and plants. To spark the public’s imagination, they’ve been calling it the “LowLine,” an echo of the celebrated elevated High Line park on the city’s West Side. And while the Metropolitan Transportation Authority, which owns the property, would have to buy into the plan, it got a nice little boost in April. Barasch and Ramsey pitched their idea on Kickstarter, hoping to raise $100,000 to start the design work. Instead, they’ve raised $150,000 in pledges from 3,300 people.