The strength of Newcastle's engineering community was evident in the great Hall of Parliament House, Canberra for the Engineers Australia 2012 National Engineering Excellence awards. 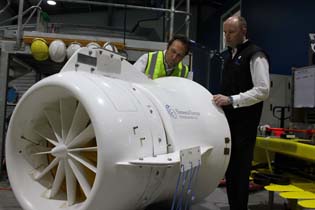 The strength of Newcastle's engineering community was evident in the great Hall of Parliament House, Canberra for the Engineers Australia 2012 National Engineering Excellence awards.

Newcastle's ATSA Defence Services, e3k and RPC Technologies participated in an Excellence Award in recognition for their role in the consortium headed by Elemental Energy Technologies Limited for the development of the SeaUrchin™ tidal energy turbine.

The SeaUrchin project had previously won the Innovation in Sustainable Engineering Award and an Excellence Award and named the Overall Winner by the Newcastle Division of Engineers Australia earlier this year. The project had competed for the national awards against 42 finalists, comprising some of Australia’s largest and most complex engineering projects.

ATSA's Darren Burrowes said “This award is significant as it clearly demonstrates the advanced engineering skills present within the Newcastle and Hunter region.

"Further evidence of our regional engineering strength is the award for Young Professional Engineer of the Year being presented to chartered civil engineer Hugh Tait who is Chair of Young Engineers Newcastle Division."

BHP Billiton's Hunter river remediation project also boosted the region's performance with its engineering excellence award for the largest environmental cleanup project of its kind in Australia and setting new benchmarks in remediation.

The Australian Engineering Excellence Awards celebrate the accomplishments of some of the finest engineering companies and individuals in the world. The winners show world-class expertise and innovation in developing and implementing engineering solutions.