World-renowned architect Frank Gehry’s work is adorning the Sydney skyline for the first time with one of the greenest education buildings in the city.

World-renowned architect Frank Gehry’s work is adorning the Sydney skyline for the first time ever with the topping out of his latest project. 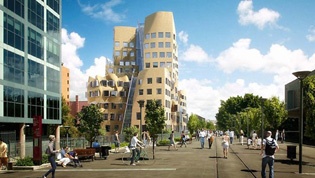 The University of Technology, Sydney’s (UTS) Dr Chau Chak Wing Building will be one of the greenest education buildings in the city, and the building has reached a literal high point with the topping out of its structure.

The striking project stands as a new local landmark even with its distinctive brick façade still hidden behind scaffolding. It is the second university building in Sydney to be awarded a 5 Star Green Star – Education Design v1 rating by the Green Building Council of Australia (GBCA).

The building’s key sustainability features include high-performance glazing, energy-efficient services, water-efficient systems, and a 20,000-litre rainwater tank. In addition, sustainably sourced timber will be used during the construction stage, while digital dashboards will communicate the building’s sustainable features.

Unveiled in December 2010 and approved in March 2012, the $150 million project is expected to redefine downtown Sydney. The 12-storey building will accommodate the UTS Business School, where some 2,390 students and staff will be able to study and work every day.

The design was inspired by the concept of a tree house. Gehry explained the floor plans were based on the idea of “a trunk and core of activity and branches for people to connect and do their private work.”

Now that the building’s main structure has been completed, contractor Lend Lease has started work on the curvilinear brick facade, a task which will see approximately 320,000 bricks laid by hand over the coming months. Lend Lease managing director of building Murray Coleman said the firm is using state-of-the-art construction methods such as building information modelling and combining them with traditional artisanal techniques.

The building’s undulating brick exterior, a nod to Sydney’s urban brick heritage, will be constructed with custom-designed coloured brick shapes. Each brick range will have a specific function for the façade. The ‘K-brick’, for example, has been designed with an angled protrusion to create the required bends and shadowing that makes the project so distinct.

On the building’s west-facing façade, large, angled sheets of glass will refract and reflect the images of surrounding buildings.

The Dr Chau Chak Wing Building – named after the noted Australian-Chinese businessman and philanthropist – is the centrepiece of UTS’ City Campus Masterplan, a 10-year design and construction program that will transform both the university and the southern area of Sydney’s CBD.

“Sustainability is a driving force for all the building works that UTS is currently doing as part of our City Campus Master Plan,” UTS vice-chancellor, Professor Ross Milbourne said. “It’s appropriate then that our highest-profile building should be the first project to receive formal 5 Star Green Star certification.”

“The Dr Chau Chak Wing Building is only the second university building in Sydney to achieve a Green Star – Education rating, and demonstrates that it is possible to integrate sustainability into an architecturally challenging building.  We congratulate UTS for its green leadership,” he said.

The building is expected to be completed by mid-2014.