The inaugural year of Landscape Solutions ‘Made with a Trade’ Apprenticeship Program has ended with Australia’s 2012 National Apprentice of the Year winning a new Toyota Hilux Workmate. 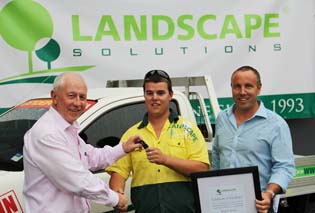 The inaugural year of Landscape Solutions ‘Made with a Trade’ Apprenticeship Program has ended with Australia’s 2012 National Apprentice of the Year winning a new Toyota Hilux Workmate. 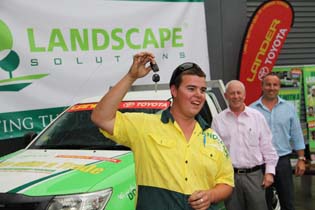 “Our ‘Made with a Trade’ program is all about attracting young people to landscaping and highlighting the importance of a trade certificate. There are so many exciting career opportunities within the industry once you have a trade under your belt,” said Tim Buckle, Managing Director at Landscape Solutions.

The winner of this year’s National Apprentice of the Year was Nick Conroy from Landscape Solutions, who was one of five national finalists. Upon receiving the keys to his new Hilux Nick said, “I love my job. When I started at Landscape Solutions I never dreamed of winning a new car – it’s unreal!”

While the performance of all five finalists was highly creditable, it was Nick’s ‘beyond the call of duty’ efforts that won him the car. Michael Warren, Team Development Manager at Landscape Solutions said “Nick really showed maturity for his young age. The best example was when Nick, while travelling behind a semi-trailer on the M5 motorway, had his vehicle’s fuel line ruptured by flying debris. He stopped his vehicle, placed warning markers on the road, and with his fire extinguisher at the ready, contained the minor fuel spillage with his company issue Chemical Spill Kit – before calling for help…. much to the amazement of the M5 Accident Response Crew that arrived minutes later!”

The success of the ‘Made with a Trade’ program was made possible by the support of Lander Toyota, Blacktown. “The program is a unique incentive towards developing the youth of Australia, and it also provides us with an alternative way to promote the Toyota Workmate Ute as the vehicle of choice for the Australian Tradie” said Rod Cullen, Dealer Principal at Lander Toyota.