‘Chelsea Flower Show’ stalwart, Fleming’s Nurseries is set to head to the prestigious international flower show for the final time in 2013 and has joined forces with Melbourne landscape designer, Phillip Johnson. 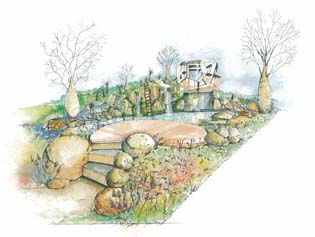 Royal Horticultural Society ‘Chelsea Flower Show’ stalwart, Fleming’s Nurseries is set to head to the prestigious international flower show for the final time in 2013 and has plans to do so with a bang.

Joining forces with multiple gold-medal-winning Melbourne landscape designer, Phillip Johnson of Phillip Johnson Landscapes, the team is going ‘off the grid’ with an ambitious landscape that serves to educate in the practices and possibilities of sustainable design, while showcasing Australia’s natural beauty on a global stage.

In what is regarded as horticulture’s most prestigious event, Johnson will be among good company, with just some of the past designers who have previously teamed up with Fleming’s including Jamie Durie, Jason Hodges, Scott Wynd, Dean Herald and Jack Merlo.

Johnson said his vision for the 2013 Trailfinders Australian Garden presented by Fleming’s Nurseries aims to challenge the ideas inherent in traditional design – looking to nature for inspiration in terms of aesthetic and function – the latter being increasingly important given ongoing extremes in climate.

“My aim is to create a design that will top the Diarmuid Gavin Magic Pyramid garden which was arguably the most talked about design at this year’s show.“To be chosen as one of only nine Australian landscapers ever to lead the Fleming’s Nurseries Australian team is quite literally a dream come true.

“As we have worked to deliver at the Melbourne International Flower and Garden Show (MIFGS) over the years, our Chelsea garden will break new ground and I hope assist to further establish Australia’s credibility in landscape design,” Phillip commented.

Phillip Johnson Landscapes has received the Ford Sustainability Award the past two years running at the MIFGS, and Best in Show in 2009. Starting out in horticulture more than 18 years ago, there was a time when he was told his designs would never be in demand.

The driving force behind Australia’s Chelsea Flower Show campaigns, Wes Fleming said he was delighted to welcome Johnson on board for what will be Fleming’s last hunt for Chelsea gold.

“It’s wonderful to announce Phillip Johnson from Phillip Johnson Landscapes as next year’s Trailfinders Australian Garden designer at the Chelsea Flower Show, and what he has planned is going to put both Australian landscape design and Australia’s vision for water sustainability on the world stage.

“Phillip started working on his design more than 12 months ago so we have already seen his passion, drive and ambition for this project.

“His team is working late nights to make this design an absolute showstopper and ahead of its time in more ways than one,” he said.

Phillip Johnson’s design concept has been accepted by the Royal Horticultural Society (RHS) for the Chelsea Flower Show in May 2013 – and the RHS has asked for a redesign and expansion to enable the garden to be located on what is the highest profile site of the show, to accommodate the scope and impact of the design.