FROM TRASH TO TREASURE


As much as people refer to big metropolises as concrete jungles, many city planners did have the foresight to set aside some large green spaces. Still, there is a lot of that concrete. 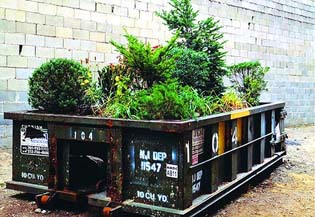 As much as people refer to big metropolises as concrete jungles, many city planners did have the foresight to set aside some large green spaces—New York’s Central Park and San Francisco’s Golden Gate Park come to mind.

Still, there is a lot of that concrete. That’s where Michael Bernstein comes in. According to The Atlantic Cities, he’s been pushing for New Yorkers to convert rubbish-bins into gardens for more than a decade. He calls his idea the Ten Yards project in reference to the payload capacity of the dumpsters.

“He developed the idea while living in Dumbo, where he operated a rooftop garden and a sidewalk vegetable stand amid a colorless thicket of buildings and overpasses. ‘I was struck by how there are no trees down there,’ Bernstein says. ‘I liked the idea that this could be a portable green space that's transported place to place. If you live in an urban place with no trees, you can get one of these delivered to your house. It's like a portable forest.’ ”

Curbed commented that, “New Yorkers will put green space anywhere they can—rooftops, waterfronts, abandoned railways. So why not dumpsters? Artist Michael Bernstein thinks the trash bins would make the perfect mobile green space, and he created a prototype long before people were reusing dumpsters for things like swimming pools. (Yes, swimming pools. Check out this link.)

In 2006, BldgBlog wrote about another rubbish bin lover, architect Ken Smith, who installed three dumpster gardens at Ohio State University in 2003. "Each of the three Dumpsters houses different plant life . . . One contains a fragment of lawn and a second has juniper shrubbery and river birch. The third stands in front of Ohio State President Karen A. Holbrook's office with a bed of scarlet (celosia) and gray (artemisia) flowers.”

But back in New York, The Atlantic Cities notes that Bernstein has come across one possible problem with his dumpster gardens. “He isn't sure who exactly would be responsible for hauling them from neighborhood to neighborhood—probably not the Parks and Recreation Department, though. ‘I do not think the city is interested in having these green spaces shipped around’, he says. ‘It's more of an allegorical thing, a comment on lack of green space.’"

Lawrence Karol is a writer and editor who lives with his dog, Mike. He is a former Gourmet staffer and enjoys writing about design, food, travel and lots of other stuff.

From trash to treasure
Universal Magazines