A UFO-inspired George Lucas Museum will blur the line between the urban environment and nature, creating a spatial experience. 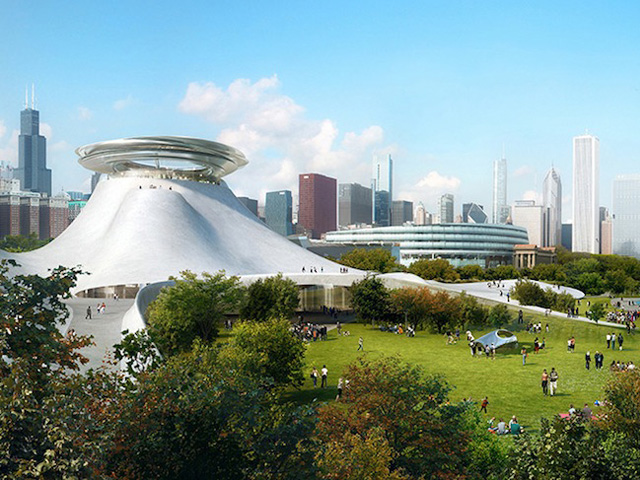 A floating UFO-inspired design has been unveiled for Star Wars creator George Lucas’ Museum of Narrative Art in Chicago. 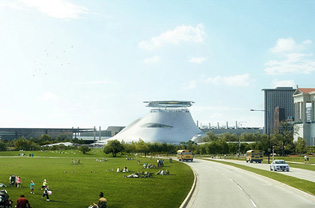 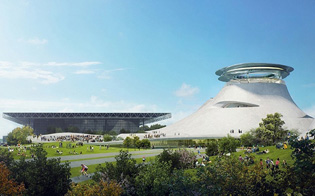 The undulating, organic design blurs the line between the urban environment and nature, while exuding a futuristic flair characteristic of Lucas’ works.

The structure itself resembles a huge snowdrift, rising up smoothly from the ground and extending outwards at the base. It undulates across the landscape to create different internal spaces and will be connected to the neighbouring green space Northerly Island by a bridge. Internally, the exhibition space is divided into three levels seamlessly connected in a series of loops.

The main body of the LMNA is crowned with a floating disc which features an observation deck with 360-degree panoramic views of the city and Lake Michigan.

The project is designed be MAD architects, who commented: “The museum is not an isolated object, but a spatial experience that is defined by the people who occupy and interact with it. It is a place to discover and explore, to communicate and contemplate. More than a building, it is an urban vista for social interaction, bringing people closer to each other and to nature.”

In addition to housing the works of filmmaker George Lucas, the museum will also display works of art such as illustrations, comics, cinema, experimental film, and digital media while also hosting lectures by contemporary artists and filmmakers.

The Lucas Museum of Narrative Art is due to be completed in 2019.