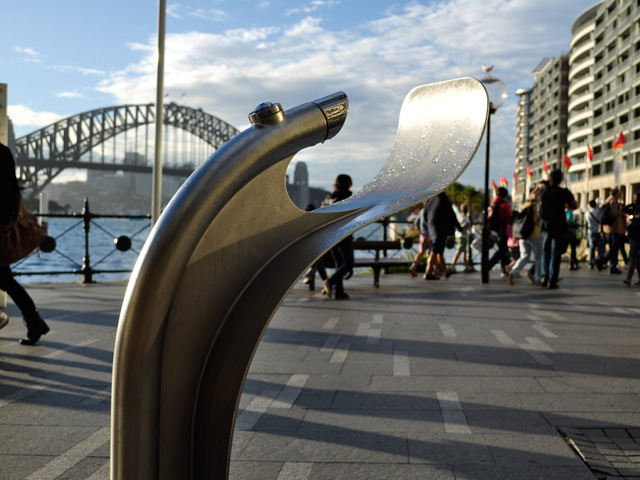 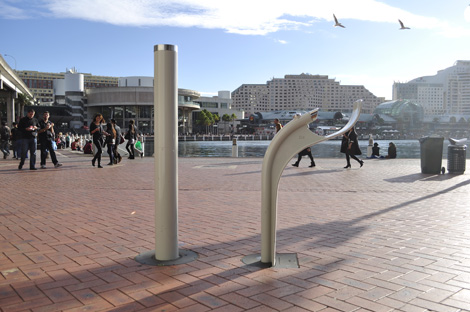 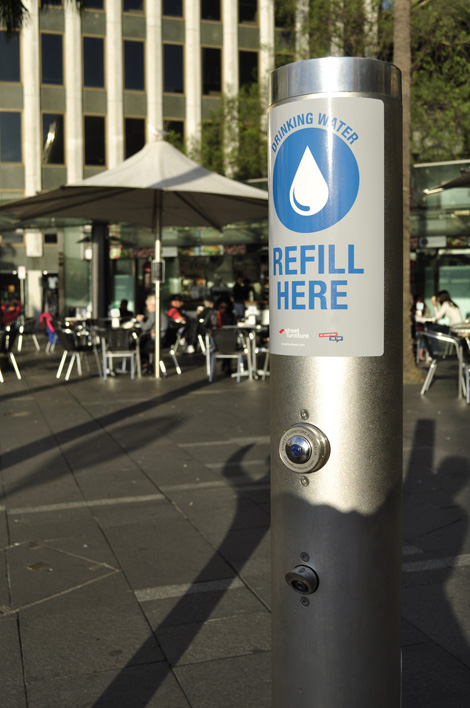 The Arqua Station was first launched by Street Furniture Australia (SFA) in 2008. It is the result of a collaboration with the environmental group Do Something! to develop a public drinking fountain and water-refill pole for single-use bottles, in order to reduce the impact of disposable plastic bottles on overall landfill.

SFA’s research and development team designed an innovative drinking fountain that exceeded existing models and dealt with such problems as poor hygiene, vandalism and inadequate access for wheelchair-users. The fountain is designed without a basin, so that litter is not collected (causing blockage) and residual water trickles easily down a sculptural blade. The Arqua Fountain is paired with the Arqua Pole, a refill facility that provides tap or filtered water to passers-by.

In 2012, SFA worked with the Sydney Harbour Foreshore Authority (SHFA) and RailCorp to install Arqua Stations around Sydney’s foreshore at a number of prominent, high-traffic locations in The Rocks, Circular Quay, Circular Quay Railway Station and Darling Harbour. A special edition stainless steel Arqua Station was designed for Circular Quay East. The installation of Arqua Stations is part of an SHFA initiative to encourage a bottle-free environment, and to accommodate for the tourist industry with the provision of fresh drinking water.

Community groups have enthusiastically received Arqua Stations since their inception in 2008. The Arqua Fountain and Pole has provided an effective solution to the harmful rise in bottled-water use, a shared public concern confronted by the ‘Go Tap’ campaign of Do Something!

In 2008, Manly Council in Sydney installed the Arqua Station and declared the council ‘bottle-free’. In 2009, the NSW town Bundanoon became the first bottle-free town in Australia (and possibly the world) by installing Arqua Fountains throughout the town and in the local public school, and banning the sale and distribution of plastic bottled water. In 2010, Monte Sant’ Angelo Mercy College, Sydney, became the first Australian high school to ban plastic bottled water, receiving strong support from parents and students alike; in 2011, the University of Canberra joined the cause.

The Arqua Station has since been situated at bus stops, beaches, cycling tracks, educational institutions, parks, shopping centres, sports centres and stadiums, streetscapes, transport interchanges and waterfronts. In 2011, the Arqua Fountain was made an official gift to the city of Copenhagen, Denmark, by Sydney Lord Mayor Clover Moore.

The commercial success and subsequent media coverage of the Arqua Station led to SFA’s partnership with the Sydney Harbour Foreshore Authority, and the large-scale provision of fresh, free water to some of Sydney’s most popular locations. Street Furniture Australia is proud to have developed a user-friendly, environmentally effective and beautifully designed product that continues to make a difference to the way people live in the urban environment.