45 energy efficient villas have been designed for Southwest China in a bid to encourage eco-responsible living. 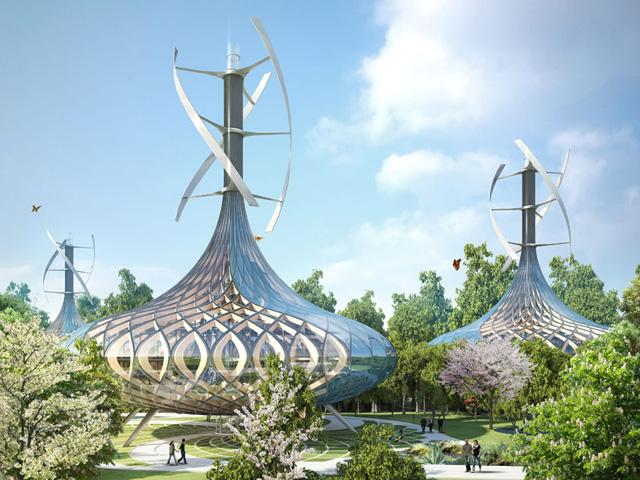 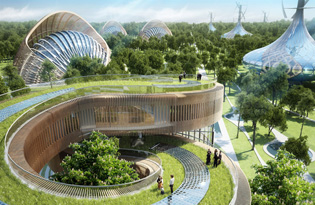 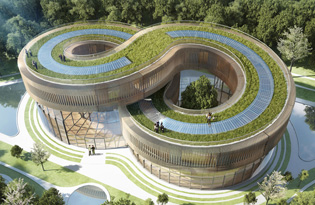 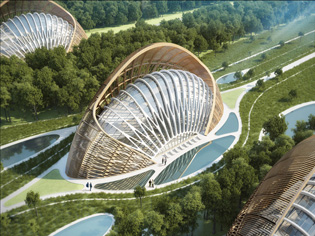 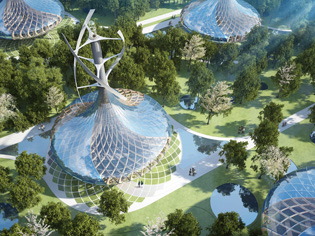 Entitled ‘Flavours Orchard’, the development is designed to encourage a close and intimate relationship with the natural environment across the 90,000 square metre site.

The project’s sustainable innovations are intended for replication across China, combining the advantages of both urban and rural living.

The concept behind ‘Flavours Orchard’ is to erect 45 plus-energy villas within its grounds, establishing a self-managed food garden. At the heart of the landscape, the series of units are linked to a smart building automation network that allows surplus power to be directed elsewhere. In addition to the fuel cells, electric vehicles are used for the buffer storage of electricity excess produced by the solar roof panels, thus assuring the free daily travels of the development’s inhabitants. The private garages for electric cars and the technical rooms for residence automation are located underground, allowing the land above to be entirely dedicated to pedestrians, cyclists or electric driverless cars.

The bio-geographical integration of the master plan respects the natural qualities of the site, while maintaining the continuity of the existing ecosystems.

Over the course of a year, the villas produce more energy from renewable sources than they consume. This is achieved in a variety of ways: large north and south facing windows allowing sunlight to penetrate the structures, the implementation of triple-glazed windows – reducing the need for air cooling equipment – and the addition of heavy insulation.

The integration of photovoltaic and thermal panels, geothermal heat exchangers and combined heat and power units ensure that the structures are passive, capturing heat during the day and diffusing it at night. All grey water is recycled in lagoons for agricultural irrigation and toilet flushing.

As the name suggests, the mobius villa forms an endless ribbon articulated around two patios, one aquatic and the other planted. With its primary steel structure and secondary timber frame, the unit is built from the repetition of one trapezoidal module. A sloping pedestrian path contains the property’s bedrooms, bathrooms, offices and libraries, while the panoramic ground floor comprises the home’s living quarters. The insulating green roof provides an external area of recreation, which also incorporates a photovoltaic glazed roof.

Envisioned as a huge Chinese fan, the mountain villa opens out at 180 degrees aligned to track the sun’s path across the sky. A more opaque north elevation directly contrasts the glazed southern façade, allowing light and warmth to enter the structure. The exterior skin develops a glue-laminated timber frame and works as a huge windscreen.

In the centre of the building, a light filled atrium connects each of the four levels, while a spiral staircase coils around a panoramic glazed elevator. The living rooms and reception spaces are opened towards the landscape through a large arch between the north and south façades.

Six stainless steel pillars elevate the shell villa above ground, ensuring that its axial wind turbine is set higher than the tops of the surrounding fruit trees. Shaped as a cocoon, the design is drawn in double curves, spiralled around three separate patios. An elevator rises through the centre of the scheme with subsequent volumes offering panoramic views across the orchard.