Proposal to develop an elevated bike network over the London train station is a lateral approach to finding space in a congested city. 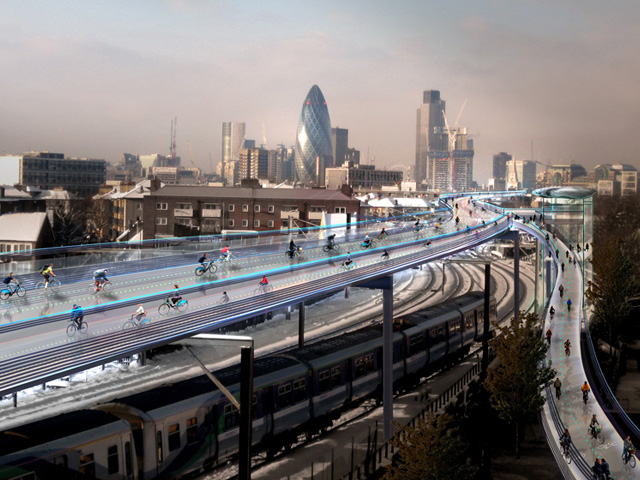 Foster + Partners and Space Syntax have teamed up to develop SkyCycle, an above-ground bicycle network over the London train system. 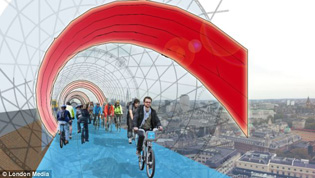 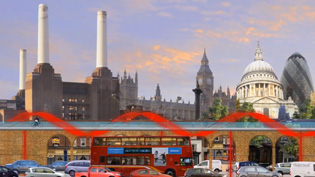 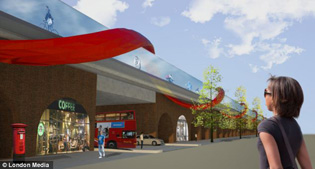 The proposed SkyCycle network will follow existing suburban rail services, providing 220 kilometres of car-free bikeroutes with over 200 entrance points. Each route will accommodate 12,000 cyclists per hour, giving almost six million people that live within the proposed skyline development easy access to the corridor.

Developed by cycling enthusiast Sir Norman Foster who designed St Mary Axe and the new Wembley Stadium; Foster describes the plan as “a lateral approach to finding space in a congested city”.

"To improve the quality of life for all in London and to encourage a new generation of cyclists, we have to make it safe," he added. "However, the greatest barrier to segregating cars and cyclists is the physical constraint of London's streets, where space is already at a premium."

As London’s railway lines were originally built for steam trains, they follow contours that naturally reduce the amount of energy expended and avoid steep gradients.

Like the Highline in New York, the benefits of the SkyCycle project will regenerate low value, under-utilised industrial sites and will vertically layer the city to create new social spaces and amenities on these cycling high streets.

Early studies of a SkyCycle system indicates the total cost will be significantly lower than building new roads and tunnels. The cycle deck would also offer development opportunities for private and public growth and generation along the road, particularly where it intersects with stations and bridges.

If approved, the routes could be in place within 20 years, offering relief to a transport network that is already at capacity and will need to contend with 12 per cent population growth over the next decade.

Funding remains the big question hanging over SkyCycle, with the designers currently looking for backing to fund a feasibility study.