Designed by Philadelphia-based Olin, this new three-acre park features a skating loop, interactive fountains, seating areas, and open spaces that will be programmed with public events. 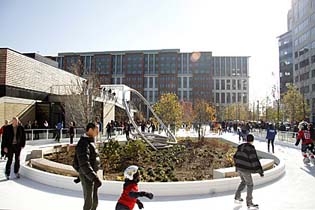 Last week marked the official opening of Canal Park, a new 3-block-long urban green space on the site of what was once the Washington Canal, a long-since paved-over waterway that connected the Potomac and Anacostia Rivers. More recently, the site served as a parking lot for school buses. 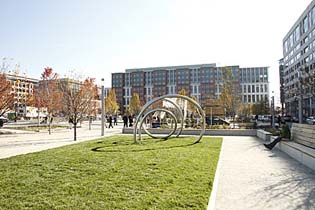 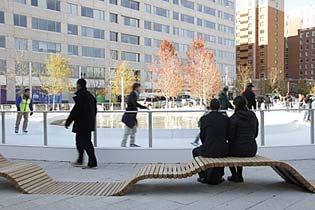 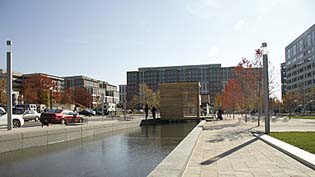 Designed by Philadelphia-based Olin, the three-acre park features a skating loop, interactive fountains, seating areas, and open spaces that will be programmed with public events such as movie screenings and farmers markets. A linear rain garden along the edge of the park is the most visible indication of a site-wide rainwater collection system that collects water runoff, held in cisterns under the site, which is then treated and used for the fountains, rink ice, and irrigation. The park’s utilities are powered, in part, by 28 separate 330-foot deep geothermal wells, which are expected to reduce overall energy consumption by nearly 40 percent.

Olin partnered with the Washington, D.C., office of Studios Architecture, which designed the permanent structures onsite, including a pavilion with a stage in the centre of the park, a storage pavilion to the north, and a 9,000-square-foot structure next to the ice rink at the southern end that houses a restaurant, skate rental, and culminates in an acrylic-panel-clad lantern volume that can be used to show movies, or be lit with pre-programmed LED light shows.

The park is pursuing LEED Gold certification and served as a pilot project for the Sustainable Sites Initiative.