A mixed-use building in Sydney will transform the heart of the city with its cascading rooftop terraces. 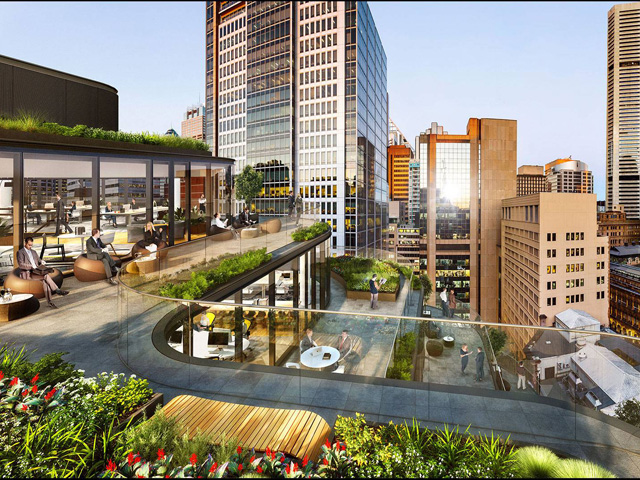 Located on one of Sydney’s most prominent corners, 333 George Street is set to be transformed into a five level building with cascading rooftop terracesoverlooking the main thoroughfare of Sydney’s business and lifestyle epicentre. This space will provide a focal point for occupants of the building, allowing meeting and interaction within a light and airy space. 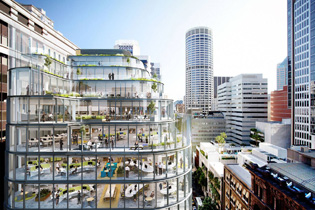 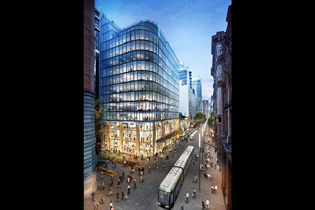 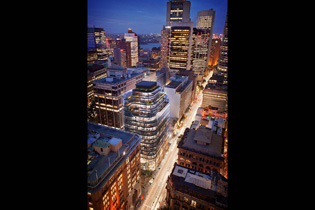 Rising from a three storey podium, the crystalline building is composed of cantilevered floor plats held in place by an elegant, minimal structure that culminates in a series of rooftop terrace gardens.

Each floor features an open interior with floor to ceiling glass allowing natural light to flood the space and forging immediacy to the urban surroundings.

The building’s shape subtly shifts as it rises, lending added dimension and allowing for the greatest capture of sunlight without casting harsh shadows at the streets below.

Designed by international architects, Grimshaw and Crone Partners, 333 George Street will offer 15 levels of contemporary office space across 12,500sqm and three levels of statement retail across 2,100sqm with extensive frontage to George Street.

At the ground floor, a destination retail space will be situated behind elegantly crafted sandstone and columns and full height windows within elegant steel frames.

Following the lead of labels H&M and Zara, International retailers Marks & Spencer have been reported as interested in buying the retail podium, which will also occupy the heart of the planned pedestrian walkway in George Street.

333 George Street aims to achieve a five-star Green Star (V3 Design and As Built) and a five-star NABERS Energy Rating.

Currently under construction, 333 George Street is scheduled for completion in mid 2016.