The new Perth Stadium will be a word-class venue that pays homage to Western Australia’s unique landscape. 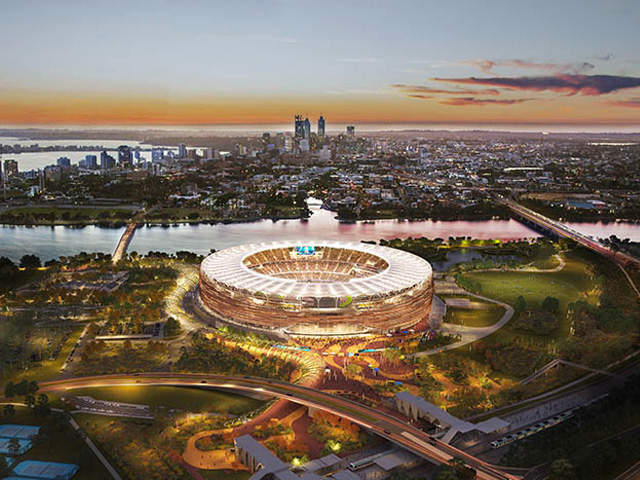 Featuring a bronze facade reminiscent of the Western Australian landscape, the design for the new Perth Stadium was unveiled by Premier Colin Barnett and Sport and Recreation Minister Terry Waldron at a special event on the Burswood Peninsula. 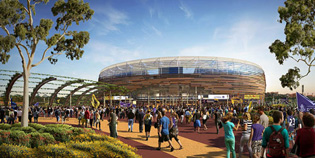 WESTADIUM, a consortium led by Brookfield Financial and John Laing will design and build the structure while partially financing and maintaining the new Perth Stadium and Sports Precinct in conjunction with the State Government.

“This is a very exciting day for all West Australians and I am delighted to reveal the design of this world-class venue, which will play a pivotal role in the transformation of Perth,” Barnett said.

“The winning design successfully meets the State’s requirement for a world-class, multi-purpose stadium within a parkland setting, and does so with a uniquely Western Australian focus.”

The stadium will be designed by a powerful design team made up of  Cox Architects, HASSELL, HKS and Arup, all of which hold local and global expertise in sports architecture.

“The new Perth Stadium seating bowl will deliver unrivalled sightlines and a distinctive architectural language in the form of its lightweight fabric roof that gives the impression of hovering over the ground.”

More than 85 per cent of the 60,000 seats will be covered by a roof, and LED lights will illuminate the stadium at night. The project will also feature two of the largest video screens in the country, spanning 240 square metres.

Like a host of new stadiums being developed across the globe, a recreational component will be included in the stadium design, offering additional community space for use during games and during the off-season.

The design for both the stadium and recreation precinct will be inspired by Aboriginal Dreamtime stories.

The western section will be home to an amphitheatre, two children’s playgrounds, picnic areas and a boardwalk, while a community sporting oval will be located to the north and will be available for public use on non-event days.

A covered Community Arbour will link the new six-platform stadium station to the river and will represent Noongar community stories.

Described as a “fans first” stadium, Waldron said the visitor experience will also be evident in the design.

“Seat sizes are generous and each one will have a cup holder; fans will enjoy access to more than 70 food and beverage outlets; and those requiring higher levels of access – such as people in wheelchairs – will be able to use designated seating platforms across all seating tiers,” he said.

Fans will also enjoy 4G Wi-Fi coverage across the stadium and beyond the two giant screens, a further 1,000 smaller screens will keep fans updated wherever they may be in the stadium.

The Perth Stadium is slated to be completed for the start of the 2018 AFL Season with Brookfield Multiplex reporting that the project will create 2,600 jobs during the construction phase and deliver $2.5 billion of value to the WA economy.