ALL IN A DAY'S GROWTH


Trials at two indoor vertical farming facilities are yielding spectacular results with one trial producing over 12,000 heads of lettuce in a single day without sunlight.

Philips Lighting has launched the latest in its indoor vertical farming experiments, with trials at two Japanese facilities—with one growing 12,000 heads of lettuce a day under horticultural LED lighting technology. Indoor farming is a growing trend in urban centres, where farmland is not prevalent. A wide variety of herbs and greens can be cultivated in climate-controlled environments under LED lighting, for an energy efficient food production method that connects local folks to freshly grown produce. 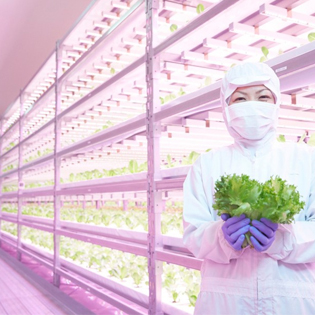 Innovatus’ Fuji Farm in Shizuoka Prefecture is an almost 1900m2  facility where farmers have spent the past 14 months growing five different varieties of lettuce. Now, the farm harvests 12,000 heads a day that are mainly frilled lettuce, green leaf, and romaine. The efficient vertical farm setup saves not only land and energy, but also water, and Fuji Farm’s harvests can be picked, packaged, and on store shelves in under two hours.

At Delicious Cook’s urban farm in Narashino City in the Chiba Prefecture, an enticing selection of edible herbs are grown under Philips LED lighting. There, farmers have been experimenting with less common varieties of herbs, including edible chrysanthemums and coriander, with great success. In a space smaller than many urban apartments (around 80m2), the farm recently completed a 10-month trial in which these unusual herbs were grown under Philips GreenPower LED system. The resulting crops will be used in the company’s processed food products.

One of the key advantages of Philips Lighting horticultural LED systems is the “recipes” used to cultivate specific crops. Farmers are able to set the precise combinations of light, temperature, and humidity level for optimal production of each type of plant. Philips makes the job of urban farmers even easier by developing specific light recipes for various crops, which dictate light spectrum, intensity, illumination moment, uniformity, and positioning. Using this approach, crop yields skyrocket, with consistent quality and flavour, all without daylight.

All in a Day's Growth
Universal Magazines