Gardens don't get much more unique than this one, located in Hawaii, designed by a renowned artist and cared for by a devoted gardener. 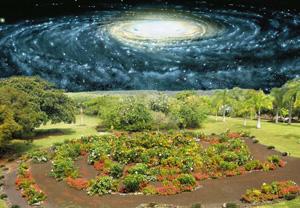 Gardens don’t get much more unique than this one, located in Hawaii, designed by a renowned artist and cared for by a devoted gardener. 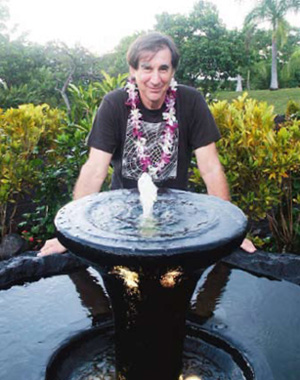 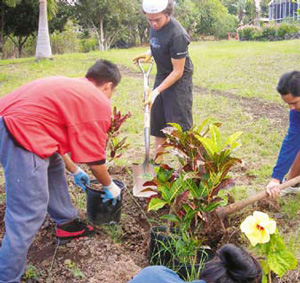 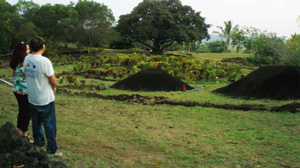 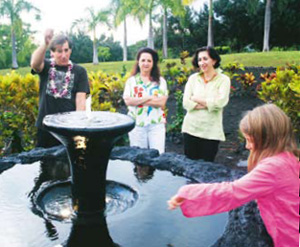 Barbara DeFranco, the woman who planted and cares for this garden, had an inspiring mentor when she was growing up, one who was very in touch with nature and her own garden and who planted the seeds of Barbara’s destiny in the years to come.

That mentor was Barbara’s Aunt Elsie, who loved the succulent plants she grew at her permaculture farm in southern California. Elsie’s farm was luxury living for her organic freerange chickens, something the wealthy people in their Beverley Hills mansions wouldn’t have understood. Let’s face it, most people still prefer to buy produce from the local supermarket than grow it themselves, and they definitely did then.

During Barbara’s teenage years, however, there was a growing number of her generation of high-school and college students who, just like Barbara, yearned to get back into the garden and get their fingernails dirty.

Now, 40 years on, Barbara is living the dream with her very own botanical gardens, Paleaku Peace Gardens Sanctuary, which in Hawaiian means “protective covering”. The name was bestowed by the Hawaiian kahunas and kapunas because this property housed and protected some culturally significant Hawaiian sites.

Paleaku Peace Gardens Sanctuary is situated in South Kona, Hawaii, an area well known for its agriculture, especially for “truck farms” — farms that grow vegetables for the retail stores. It’s also where Kona coffee originated and an area where macadamia nuts are among the more popular tree varieties grown commercially.

Occupying nine acres, Paleaku Gardens possesses two very special Hawaiian features: ancient petroglyphs (stone carvings) that are almost 1000 years old and burial sites, which Barbara now cares for. When Barbara first discovered these in large caves on the property, she immediately decided this land could not become a truck farm. It had to be something different, something quite unique.

Leaning towards a fairly tropical selection, Barbara began randomly planting all kinds of plants but never really having a master plan for what Paleaku Gardens was to become. “It’s grown from different people’s visions and it grew into a place that has monuments of all the different religions of the world, including Native American and Native Hawaiian,” says Barbara. “The land taught me a lot. It’s really my spiritual connection and teacher.”

South Kona land is known for its rocky ground and Barbara’s is no exception, with lots of lantana and other weeds growing wild on it. She began the painstaking task of clearing the weeds bit by bit and then, with lots of mowing, mulching and fresh soil that was brought in, the beginnings of Paleaku Gardens were established.

Barbara’s neighbour, Jon Lomberg, is one of the world’s most distinguished astronomyinspired artists. He suggested for years that she should create something special on her property. His initial idea was to do a mural but dropped that idea. Then he suggested a garden, but not just any type of garden — it had to be special. It could not be a smallscale model of any of the native gardens around the world, nor could it be a concept developed around a famous garden. This garden had to be unique, vibrant — a garden that’s out of this world.

Jon wanted to create a galaxy garden: an outdoor scale model of the Milky Way using living plants. Once this idea got the tick of approval from Barbara, he immediately began to put his artistic talent into action by mapping out the galaxy he knows so well, positioning the stars exactly where they belong.

To help establish the scale and dimensions of the area where the garden would be developed, they laid out a gridline using string to set out the spacing and positioning of the plants, each representing a star within the galaxy. The proposed area of the garden was now established, its diameter approximately 30 metres. Now they had a plan.

Because the ground was so rocky and virtually impossible to dig by hand, a friend who owned a backhoe helped trench out the lines for the spiralling garden beds, then backfilled with fresh, composted soil. With the help of local high-school students, Barbara and Jon began by first planting out the galactic arms of the universe.

Five years on, the Galaxy Garden has really taken shape with plenty of strong growth throughout the plants. The different colours, shapes and sizes of flowers and foliage have now begun to display their full glory, dramatically representing the different bits of the Milky Way. Needless to say, it is the most maintenance-intensive part of Paleaku Peace Gardens Sanctuary.

“For me, its beauty is really the spiral effect of looking at it when trimming and caring for the garden. It starts low on the outside and as you go towards the centre the hedging of the garden itself starts to go up,” says Barbara. “If you search Google maps for Paleaku, you can actually see the Galaxy Garden.”

It should be noted that this project would not have been possible if not for the Change Happens Foundation, a nonprofit organisation that played a key role in helping the project move along and that continues to assist financially with some of the maintenance of the garden.

Some of Barbara’s favourite plants in the Galaxy Garden are the multi-coloured crotons for their vibrancy and ease of growing, while the native hibiscus are a little more challenging because they develop blister mite, which is controlled by regular spraying with peppermint soap and neem oil.

Paleaku Gardens is full of exotic and tropical plants, including productive varieties such coffee, macadamias, starfruit, mangoes, avocadoes and even Surinam cherry, a large shrub or small tree that grows to eight metres, bearing fragrant white flowers and producing reddish fruit to 2cm in diameter.

Outside Paleaku and the Galaxy Garden, Barbara has only her herb garden. Because of her busy work commitments, time doesn’t allow her the pleasure of caring for a productive garden of her own, but she still maintains a lifestyle that is as truthful and organic as possible.

So where does someone like Barbara go for fresh produce? To the organic healthfood store, of course. “I always buy organic — I don’t know why you wouldn’t. I eat organic produce as much as possible,” says Barbara. “I really believe in that and I believe in buying fresh produce and I also believe in buying from local growers where possible. “I must say, I enjoy a good organic Fuji apple, but unfortunately we don’t grow them here. It’s something I must look into...”

But the fact that the supermarkets and large stores continue to sell produce that has been chemically compromised and/ or preserved doesn’t faze Barbara at all. “I don’t think like that,” she says. “There is a reason for everything that happens in this world. This world is made up of different people with different ideas ... I’m just glad that I can choose what I want, when I want.

“It’s so important that we care for something other than just ourselves. Let it be our children or animals or let it be a plant. In doing so, it offers an opening to your own heart,” muses Barbara. “And I think that to open our hearts and care for ourselves, a plant or even a culture is a good thing. That’s how you can bring the idea of peace and harmony within yourself and to others around you.”

There are so many different ways in which people come to understand beauty, joy and fulfilment, whether it be through art, music writing or reading. Or gardening. There are so many beautiful varieties of plant life that bring us to that place of feeling complete and in awe of beauty. Barbara DeFranco finds that feeling in Paleaku Gardens.