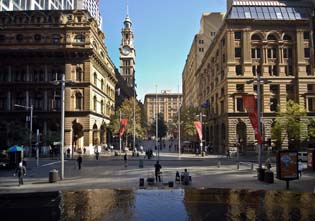 At its last meeting alone, the CSPE approved five projects totalling $603 million. These included:
• a $257 million, 37-storey commercial tower taking in four properties at 188-194a and 196-208 George Street, 4 Dalley Street and 1 Underwood Street
• a $76 million, 19-storey commercial building at 331-333 George Street, which will result in the developer contributing $765,970 to the Regimental Square refurbishment and improvements to the public domain
• a $99 million, 80-metre-tall building at 137-151 Clarence Street and a $78.7 million building at 161-165 Clarence Street, which will lead to the coordinated renewal of the city block
• the $93 million refurbishment of 20 Martin Place from an outdated building to a contemporary five-star Green Star and five-star NABERS Energy Rating.

Lord Mayor Clover Moore has said “The City’s Planning Department has done a lot of work to unlock major sites in the city to make them more attractive to investment”.

According to a global cities report from Cushman & Wakefield conducted at the end of last year, Sydney ranks as the sixth biggest destination for overseas commercial property investors to place their funds.

These major new developments will increase quality commercial and residential floor space, leading to more quality jobs and further investment in the local economy. It also ensures that the public domain is continually enhanced. “This is encouraging the revitalisation of laneways, an increase in public squares, better pedestrian connections and more landscaping to make Central Sydney a more attractive place for everyone”.

With many urban sites experiencing similar rejuvenation, Sydney is set to increase its economic prosperity and secure further foreign investment in the future.

GET IT TO GROW WITH GGS