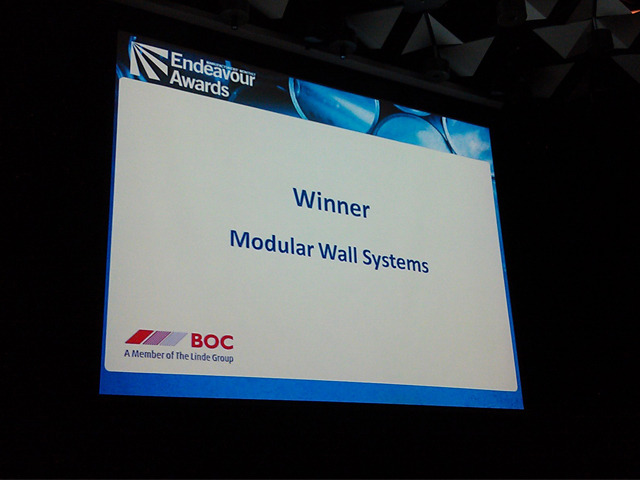 Modular Wall Systems wins Industrial Product of the Year and Steel Innovation of the Year Awards.

This year’s winners were announced during the biggest awards ceremony in the history of the Endeavour Awards. The event, hosted at the Sofitel Melbourne Hotel, featured various influential speakers, including Shadow minister for industry Sophie Mirabella and Manufacturing Australia's chair Sue Morphet.

Modular Wall Systems’ Jason Harvey addressed the audience twice during the night, after receiving awards for both Industrial Product of the year for ThermaMax Panel and Steel Innovation of the year Award for QuikWall. The company’s acoustic fencing product SlimWall Designer Fencing was named a finalist for the Consumer/Trade product of the year.

Modular Wall Systems would like to take this opportunity to thank all of its customers, trade partners and suppliers, all of whom support the company’s innovative drive and consistent growth.