Horticulturists of the future

On Friday November 7, the Australian Institute of Horticulture hosted the 2014 National Awards night for professional horticulturists. Amongst the Awards given that night two categories were of note for the future of our industry.

The BBM Sir John Pagan Horticulture Award included a travel scholarship to the UK and Europe worth $8000. The 2014 Scholarship was presented to Caitlin Sawyer, a Horticulture student of Charles Sturt University. During her speech Caitlin’s passion for her chosen profession shone through and brought warmth to the heart of the audience.

The AIH Student of the Year Award, sponsored by Agrifood Skills Australia, was won jointly by Chantelle Leenstra and Christopher O’Connor for showing innovation, commitment to the industry, quality & diversity of horticultural skills and knowledge – with their input providing benefits to the whole Horticulture industry.

You can read more about Caitlin Chantelle and Christopher here.

These three enthusiastic young people are showing us that the future of the industry is bright. They spoke in an articulate, well measured tone that clearly showed the room their thought out decision to follow a career in Horticulture was not spur of the moment.

The Horticulture industry needs to show more support for the youth who choose the calling of our profession. This can be done through paying above apprentice or trainee Award, by teaching them the trade and not using them as barrow boys and girls, and by asking ourselves if our educational standards need to be improved or even reformed. 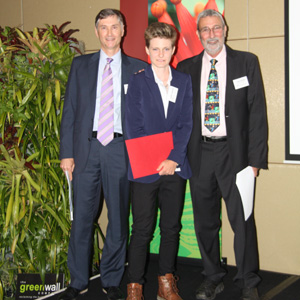