Green the Street; A Community Experiment

Streets and roads are the dominant infrastructure concern of governments and most streets are conceived as conduits for vehicles. How might streets be reconceived to contribute more to communities? And how do green streets help grow caring and just communities? 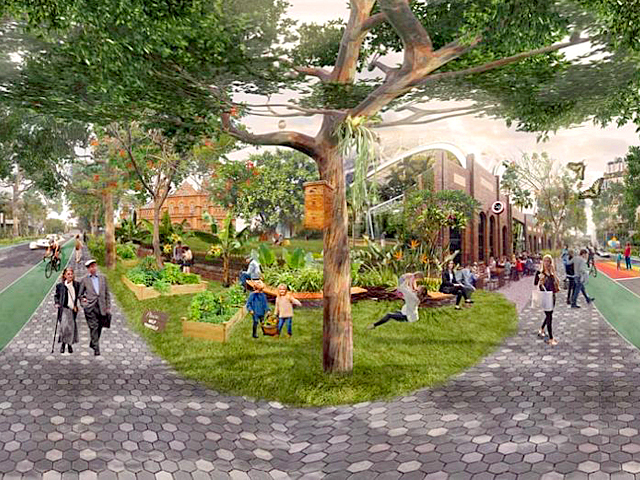 These questions have been the driving interest of Green the Street, a community group originally dedicated to improving the streets of Brisbane that has now expanded nationally. With a mission of “greener, healthier, liveable streets”, Green the Street began with the coming together of over 30 organisations at last year’s Royal Queensland Show, affectionately known as EKKA. Driven by the interests and energy of Catherine Simpson, an urban designer with Roberts Day, the group has continued to grow. From impressive beginnings in 2018, Green the Street returns to Brisbane even bigger this week, taking over 70 metres of Gregory Terrace as part of this year’s EKKA.

In the past year, Green the Street has hosted a variety of festivals, including Vergefest, which took place across nature strips and backyards from West End to Highgate Hill, as well as activations, parties and get-togethers that support planting, active transport, music, art and education in local streets. Simpson is quick to point out that the programming is a creation of many people “from artists to beehive creators, vertical garden innovators and engineers to city farms and creative collectives”. She declared it had “been a blast to work with some of the loveliest and most passionate people in Brisbane” on last year’s EKKA.

For Simpson, what makes Green the Street so special is that it is community-driven. “A vast group of volunteers, organisations and sustainable businesses – 40 this year! – come together to consider what the street can be,” she explains. The key fascination and engagement lies not in just imagining, talking or picturing what could be possible, but in prototyping ideas in a real street. Green the Street “builds the street in real life” to show people what they could do. As the Green the Street Facebook page enthuses: “You may come to the show for the dagwood dogs and the rides, – but we hope you will come and see a reimagining of what Brisbane’s Street of the Future will be!”

The Dystopia vs Utopia immersive reality experience at EKKA will reveal possible streets of Brisbane in 2050. There are good and bad possibilities in how we use new technologies and deal with hotter, drier climates.

The Dystopia vs Utopia immersive reality experience at EKKA’s Green the Street will reveal possibilities for the future of Brisbane’s streets. There are good and bad possibilities in how we use new technologies and how we deal with hotter, drier climates.

“EKKA is a great venue to meet a lot of people from all walks of life” explains Simpson. Over 400,000 people attend the show including regional Queenslanders who get to engage with what the future may be in an experiential and immersive manner. This is important. As a design professional, Simpson is concerned the climate and public space adaptations that design professionals will be introducing in coming years will need to be taken up quickly and championed by everyday people to be most beneficial.

CHAMPIONS FOR GREEN STREETS ARE COLLABORATORS

In the face of increasing evidence of the physical and mental health benefits that green spaces offer; local communities are seeking to provide their own. The recent national ‘Growing Together’ tour of Vision 202020 has shared how design professionals, council and community engage around Australia to increase tree cover. Its collaborative mission is to make urban areas 20 percent greener by 2020 and provides practical project examples and toolkits to achieve this through their website. The next event on the Growing Together tour will be held in Sydney on August 8, 2019.

Libby Gallagher’s award-winning Cool Streets project has been previously featured on the tour. Cool Streets has been increasing street vegetation since it launched in Sydney’s Blacktown in 2016. Early on, Gallagher was interested in understanding resident perceptions and why they might not want street trees. Working with people in different places revealed different attitudes and preferences such as tree positioning and species and concerns about leaf litter. Acknowledging this made it easier to find solutions and get more trees into particular streets.

Cool Streets is, importantly, a collaborative consultation method formed around two stages: information gathering and sharing, followed by design options for communities to consider, choose and enact. The project is not simply a street tree planting program, but essentially “a process of empowering residents to make the right choice for their street, and enabling people to meet each other on the street”. 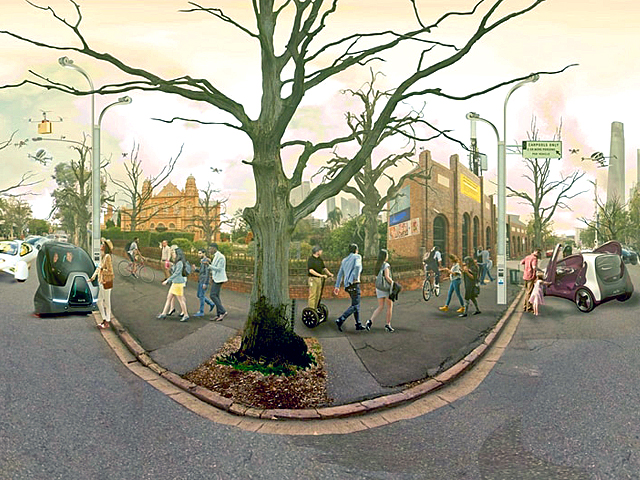 Meeting on the street is exactly where things are happening. Free markets, festivals and fairs that offer advice and demonstrations of sustainable technologies are increasingly popular. The National Sustainable Living Festival held its first festival in 2003. Now running for a month in Melbourne every February, the festival boasts over 100,000 visits a year with impacts that make it the biggest festival of its type in the country.

The street to be in this coming week, is Brisbane’s Gregory Terrace from 9th to 18th August 2019. Green the Street is making it very and variously green. Over 100 square meters of street will be home to thousands of plants – including the edible and the indigenous – hundreds of trees, new solar technologies, electric rideables, augmented reality, urban agriculture, a huge parklet, artwork including biophilic and biomimetic installations, and interactive visitor walls.

In a burst of further experimentation, this year’s EKKA installations will include ‘Future is Fungi’ looking at some of the amazing attributes of mycelium to sequester carbon, break down plastics and provide building materials with the strength of concrete. Another section will evidence circular economy in the street, while the section ‘Dystopia vs Utopia’ will dramatically render the challenges of changing climates and technological responses using immersive reality to explore where ‘smart’ might take us.

GREENING STREETS IS GOOD FOR PEOPLE AND PLANTS

Catherine Simpson of Green the Street is delighted that the organisation is becoming a decentralised community movement with its own impetus. Various urban agriculture and ecological planting projects are being taken up independently of the group, developing and shifting the initial ideas even as they borrow titles and terms. “People are hosting their own Vergefests, verge planting parties and Green the Street parties throughout Brisbane,” says Simpson. She also believes that while the activities of greening streets will make them more attractive and resilient physical environments, they also encourage resilient citizens who self-organise as they actively express their ideas about rights to the city, and even to places of beauty, through the projects.

“The idea of Green the Street is adapting to include concepts such as the ethics of the street, who makes the street, surveillance and what the focus of our city making should be,” muses Simpson. She hopes the community groups’ activities are leading to more open and public debates between the various city makers of Brisbane, further widening the understanding and possibilities of urban design beyond industry professionals.

Many local councils are eager to both boost vegetation cover in their municipalities, and also foster better engagement with and between their communities. Placemaking has been adopted and explored by many institutions and frequently involves art and planting as place-bonding activities. The core message of successful placemaking projects is that professional expertise and advice is there to enable the community to explore possible outcomes and realise their best possible delivery.

Jason Schupbach, once director of Design and Creative Placemaking at the National Endowment for the Arts in the US, has spoken of the important role design and the arts had in community development during the Global Financial Crisis. From his perspective, it is arts strategies that can and should make places better, not places that provide support for the arts. That is what creative peacemaking means. Similarly, for Green the Streets and Cool Streets, it is about what greening strategies and projects do for communities, not simply how communities can be encouraged to plant things. That way, improvements are valued and vegetation can grow strong along with its human nurturers.