With the closest beach currently sitting half an hour outside the centre of Melbourne – and that’s by driving – Damian Rogers Architecture has come up with an exciting way “to bring the surf to the city,” as Max Wells, chief executive officer at Surfing Victoria neatly puts it. The collaboration between Damian Rogers Architecture and Arup – the engineering magnate established in 1946 and responsible for the structural design of the Sydney Opera House – has brought about the awe-inspiring and ambitious concept of an artificial floating surf park in Docklands, Melbourne.

In addition to the filtered salt water pool drawing from Victoria Harbour, the proposal includes a sand area as well as a grassy park under which current illustrations show change room facilities and small retail outlets. A boardwalk would connect this floating piece of paradise to the Docklands via an extension of central pier, near the Etihad Stadium.

Hardly one to shy away from a challenge, Damian Rogers envisions surfing artificially engineered waves up to 1.5m high, conceding that “the whole idea came from being able to surf in a city location.” Adding to the cultural appeal Melbourne so strongly exudes, there’s something for everyone; food, art, fashion and even a bit of tennis, certainly such a foreign concept in itself would be an attraction to the city of Melbourne. 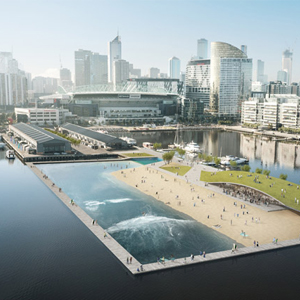 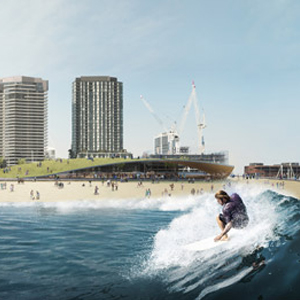 Previous postHorticulturists of the future Next postCrumpled Paper Bag Building