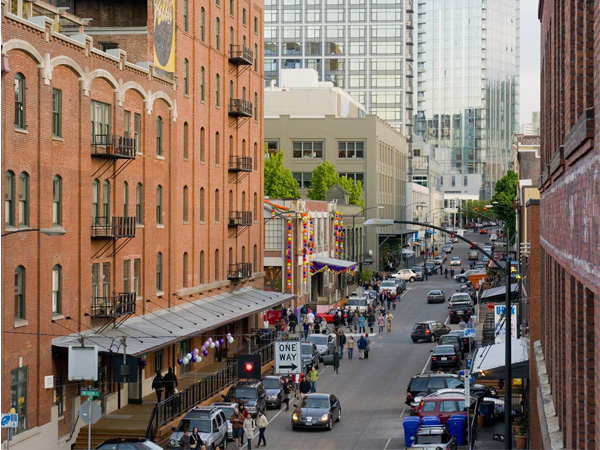 I have lived in neighbourhoods where you can walk around, to a store, a movie, a restaurant, for 40 years, counting my college days. I grew up in a ranch house with a driveway, but came to adulthood in foot-based parts of cities.

Others have also rediscovered the joys and benefits of walkable places. They have done this first in a trickle then in a flood. While in total numbers it may still be a minority taste, but it’s a fashionable taste now, one heralded in movies and TV shows. Fewer people aspire to live in the big house with the three-car garage.

Philip Langdon has written a book, Within Walking Distance: Creating Livable Communities For All (Island Press 2017), that bores down into this trend and puts some markers on the choices involved. Because there are choices. While on a gross level urbanism is back, on the street level someone decides whether it is small stores or chains, bike paths or parking spaces, small entrepreneurs or moneyed corporations.

Langdon’s book, as well as a new one by urbanist Richard Florida, The New Urban Crisis, talk convincingly about changes our cities and neighbourhoods are going through. The two books overlap each other in revealing and troubling ways.

But first, let’s look at Within Walking Distance. As you might guess, Langdon is a fan of changes and construction from the ground up. In this, he is similar to Roberta Gratz, author of The Living City and other books that praise bottom-up urbanism. Here, Langdon examines six districts or neighbourhoods that have reversed decay or come out of nowhere, so to speak: Northern Liberties, a neighbourhood in Philadelphia; Little Village, a Mexican-American section of Chicago; East Rock, in New Haven; Brattleboro, Vermont; The Pearl District in Portland; and the Cotton District in Starkville, Mississippi.

The stories are important, because they help us see that nothing is predetermined. While there has been a general urban revitalisation, individuals and groups make choices that determine the flavour and health of an area. An individual can spot an abandoned house or corner store, renovate it and anchor a neighbourhood. In Northern Liberties an abandoned industrial property sparked a successful movement to turn it into a park, which in turn brought the neighbourhood together.

The most unusual area Langdon examines is the so-called Cotton District in Starkville, Mississippi. There, Dan Camp, a developer besotted with traditional architecture, has for decades built houses and apartment buildings with columns, lintels, cornices and various other attributes of classic old neighbourhoods. And Camps is not only equipping his buildings with these cultural signposts. He has trained his crews to craft these pieces themselves and possess skills such as hanging a window the old-fashioned way. It makes no sense from a business perspective, which is why it’s interesting. You would never see this in a business school syllabus. But Camps, a for-profit developer, has made money and a reputation, both for himself and his city. City fathers now advertise the Cotton District as something that makes Starkville special. This is not the same thing as great. At least judging from the pictures in Langdon’s book, Camp’s buildings look odd—the proportions on the buildings seem a bit off—rather than quaint or well-crafted. Still, it’s undeniably interesting.

But the Cotton District is an exception in Langdon’s book because it was conjured out of basically nothing. Every other place Langdon describes is about renovation and rehabilitation, species of historic preservation, not creating anew.

This gets at something that has interested and baffled me; it appears impossible to create a brand new walkable place. I cannot point to any new subdivision, neighbourhood or city district that functions as a fully walkable environment, or nowhere near as well as an old environment. We appear able to restore walkable places, but not build them anew.

I have tried to figure out why walkability eludes even the best minds of our planners and developers. And I haven’t come up with clear answers. What some developers and architects have told me is that even in new districts created with lots of transit, even with a subway line underneath it, the routine and habitual efforts to accommodate driving and parking kill or at least dilute the urbanism to the point where it’s impaired.

In a way, Langdon’s book is an admission of defeat, because, with the exception of the Cotton District, which doesn’t actually look that walkable, all his places are old places. Yet Langdon served for years as senior editor of The New Urban News, whose chief role was promoting New Urbanist places like the famous Seaside and Orenco Station outside Portland. That Langdon doesn’t mention any of these new places, except in passing, is telling. Langdon comes close to saying this in his Introduction where he states that after the housing crisis of 2007-2008, “It became clear that the walkable communities Americans were most interested in were…old city neighbourhoods, downtowns, former industrial precincts, and compact first-ring suburbs.”

Just where are these walkable communities that Americans are interested in? If we widen the lens further we see that most of them, the thriving ones that Langdon examines, are part of or near rich metropolises, the world-class cities that have taken off over the last generation. And it’s here that we start to overlap with Florida’s new book, whose full title is the distressingly long, if revealing, The New Urban Crisis: How Our Cities Are Increasing Inequality, Deepening Segregation, and Failing The Middle Class—And What We Can Do About It.

Florida, who made his name as a promoter of cities and the idea of the “Creative Class” taking root in them, agrees with Langdon that city-living has come back. But he then points out something that is now coming into stark relief: it’s really only the global, super cities that are reviving, and they’re doing so hand-in-hand with wealth and income inequality. The broader revitalisation of cities, sadly, is just not part of this trend. It is, in fact, helping cause it as lopsided wealth-creating industries such as tech, which thrive on the person-to-person contact, start or relocate to walkable environments.

In response to this, the average folk, the non-walkers so to speak, are rebelling. Florida tells of moving to Toronto in 2007, home of streetcars and legendary urban saint Jane Jacobs, only to see Rob Ford elected mayor, the crack-toking buffoon who campaigned on ripping out bicycle paths and promoting car use. It was the suburbanites who elected him, those who felt left out of the “complete streets” visions of the elites downtown.

Something similar happened on a national level with the election of Donald Trump, Florida says. This too was a rebellion of the cul-de-sac dwellers. These are the people left out of the urban fairylands portrayed in HBO’s Girls and other shows.

What Langdon doesn’t say, and perhaps doesn’t see, is that most of the places he portrays, while occupied by hard-working, down-to-earth people, are mostly appendages to big global cities that have found a way to make it in this new era of global wealth and income inequality. They are lapel pins on the jackets of some very rich dudes.

So, while the garden growers in Northern Liberty may seem humble, they exist because greater Philadelphia has managed to carve out a role for itself, mostly through higher education and healthcare, the so-called “eds and meds,” and its proximity to New York City (it’s described by ex-pats from Brooklyn as “the 6th borough”).

It may be overstating to say that only the rich, unequal cities have come back, and Florida overstates his case some. But not by much. While there are some humbler cities that have come back—my hometown of Norfolk comes to mind— there are dozens of other highly walkable towns and cities that lie abandoned or semi-abandoned. They range from the highly publicised blocks of Baltimore, to anonymous small towns spread over every part of this country.

So what to do? First of all, the urban revitalisation is a good thing, even if it does accompany inequality. But we should address that inequality by the most direct means. This means higher taxes on the wealthy, and better, more complete social benefits, such as universal health care, pension plans, family leave and vacations. It means addressing, not through tinkering with the design of our streets and sidewalk and setback rules, but with how we allocate jobs and income. It means adjusting the rules of that game.

If we address that, we have a chance of producing a more even mix of urbanism, one that spreads from smaller towns and cities in the midwest, to the famed coastal metropolises we hear so much about. And there’s no reason those places can’t be walkable.

Image of The Pearl District from Travel Portland