There’s a big green roof on top of the Williamsburg offices of Vice in NYC. There is what looks like a picnic table with a solar panel sunshade nestled in the planting which designer Matt Kovaleski describes as “a space for urbanites to relax in the shade while charging whatever they need off clean energy.”

This humble picnic table is in fact a full free-standing self-sufficient off-grid system with batteries and inverters.

Matt tells us: The design, engineering and wire routing were all developed in CATIA, from which all fabrication drawings and part orders were done. The intent was to provide a space for Vice employees to work or relax outside on and charge anything they might need via solar while doing so. The unit has six three prong outlets and four USB ports. On an average day’s yield in NYC the system supports more than 12 hours of continuous laptop charging, four tablet charges, 12 smartphone charges and keep 2 LED light bulbs on overnight.

If you are going to work on your computer outside you need shade, and the solar panels set up over the table conveniently provide it. You are going to need power, and the battery bank and inverter provide that. Matt notes that “the transition to alternative energy has been and will be incremental, with societies slowly changing the way they power their lives. The solar outpost is a transitional step that makes clean energy available to anyone.”

It is built from lumber recycled from an old Brooklyn water tower. “We took the material of an icon of NYC’s past and used it to give form to an icon of a sustainable future.” It’s subtle design means nobody using the Solar Outpost is going to know they are sitting on a bank of batteries and an inverter; that they are plugged into a seriously off-grid independent system. But they will find out during the next New York blackout, when the whole company is huddled around the table on the roof of the company’s headquarters. 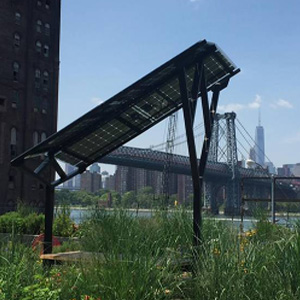 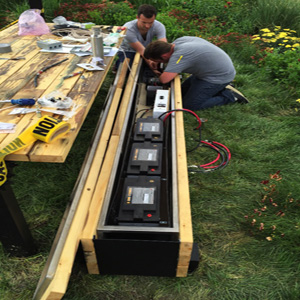