Strong urban design offers significant community benefits, better quality of life, safer and more secure cities and a greater ability to function as a society. It also provides each city with a unique sense of identity and establishes the framework for it to be more responsive to differing climatic, economic or social variables. Regardless of the size of a city or project, urban design is inclusive in achieving outcomes that holistically make for better-built environments and, in turn, a way of living.

In a recent interview with Urbis National Director James Tuma, The Urban Developer investigated a series of urban design strategies that are key to achieving better cities. These are strategies that transcend the specific differences between each city and are an overarching guide to what makes for enhanced quality of urban life. A guide to more valuable, contemplated and viable cities that is useful to both those shaping and utilising them. 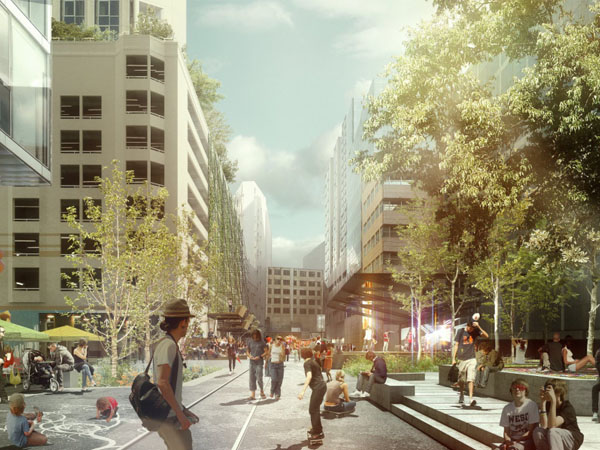 CLARITY OF PURPOSE AND POSITION IS KEY

The ability for a city to positively evolve relies solely on the effectiveness of the plan behind it. If that plan is unclear or disjointed the urbanisation will follow suit. If established correctly all parties involved in shaping a city can consolidate easier and efficiently achieve one clear vision.

“The best urban outcomes start with a clear idea about purpose, a personality for the place if you will. Knowing what it is you are seeking to become brings order and clarity to design thinking and creates a clear framework around which investment can be prioritised and staged,” says Tuma.

Singapore’s singular vision of “city in a garden” is an example of clear purpose and key positioning; urban design managed successfully due mostly to the Singaporean style of governance. The implementation of this action plan has had a direct effect on the design, character and delivery of every part of the city.

In order to convert Singapore from a “garden city” to a “city in a garden” the government proposed the following urban strategies:

With the key elements towards success being:

By 2030 the Singapore Government hope to achieve through this plan of action:

BE FLEXIBLE AND ACCEPT CHANGE WILL HAPPEN

Having an overarching plan towards the identity of a city is important however equally so is ensuring it’s flexible enough to accommodate variable factors.

“The era of the noble blueprint for precincts and places has passed. That is not to say a compelling image of the future state of a development isn’t important (it is) – but rather that the strategies and principles behind this are where the real value lies. Changes in market conditions, access to capital, retail trends and other factors all require constant tuning and flexibility built around a strong set of ideas that ensure whatever the outcome, it has a sense of coherence and, as noted, purpose.”

Flexibility within structure is exemplified through Brisbane’s “new world city” plan. In particular, the “buildings that breathe” design guide which provides a series of strong strategies that can be applied in varying ways to respond to prevailing market conditions; while at the same time working toward the intent of a truly subtropical city form. These are a set of guidelines that are rigid enough to achieve consistency across the city yet still remain flexible for the unforeseeable. The parameters within this guideline are:

MEAN SOMETHING TO SOMEONE (NOT NOTHING TO EVERYONE) IN THE CONTEXT

By creating a strong sense of place it increases the likelihood of positive interaction and engagement. Precincts and places being considered as part of a wider ecosystem of destinations and being distinctive are critical to long-term attractiveness and short-term performance.

“This may mean a strong local food theme like the Grounds of Alexandria or an arts DNA like the art series hotel chain. Other opportunities include the integration or wellness, environmental, sport, local crafts or culture – the list of points of differentiation is endless but having one is essential in creating high-performance urban design and places that mean something to someone.”

By staying true to showing its heritage and maintaining its character, the RNA precinct in Brisbane is being allowed to evolve yet still remain meaningful. This will determine its long-term success as a precinct because it’s primary function, events and attractiveness to the community, is pivotal.

A key strategy in achieving this is the master-plan upgrading around a long existing and celebrated event. Instead of relocating the annual Royal Queensland Show (Ekka) and completely repurposing the area, the precinct is being built up to improve a current function that has strong ties to the community. To relocate the Ekka would have removed historic meaning from the precinct.

Start with Context and Connectivity

Never design just the site. Successful developments integrate with their context as opposed to standing alone. How society functions around the site is equally as important as how they do within it.

“The days of red lines around precincts are long gone as we understand much better that it’s the agglomeration of destinations and experiences that draw out and capture real value. In this context investment in seamless linkages tends to add more value than the idea of ‘gateways’ – it means the project is about making the city better rather than making an isolated precinct.”

Context and connectivity are major factors in Sydney’s Goods Line. Connecting more than 80,000 tertiary students it’s surrounded by some of Sydney’s most important cultural, educational and media institutions. The Goods Line is increasing engagement using a series of public attractions such as grassed areas, dining spaces, study pods in the trees and table tennis tables. In addition, it’s also recently fostered a culture for pop-up events. By acting as a connective tissue across multiple sites and precincts, The Goods Line is elevating value and amenity between a series of prominent destinations.

THE PUBLIC REALM IS THE PLAN

French philosopher Roland Barthes once said that “The skyscraper establishes the block, the block creates the street, the street offers itself to man.” In order to achieve successful cities “public realm” is imperative.

A notion strongly supported by Tuma. “People visit and choose to stay and invest in a place, primarily because of the experiences they have in the public realm. Streets and spaces are the backbone of these positive experiences and the most successful developers know this. Recent work in transforming the streets of New York into pedestrian-friendly spaces, and in London where strategic cycling and pedestrian infrastructure has transformed major traffic routes, are examples of this and have had marked effects on the perceived liveability and attractiveness of those cities.”

Another example is Kings Cross London where a clear structure for the public realm has driven in turn the land use and events activation strategy. Kings Cross was a unique opportunity to develop the largest plot of derelict and underused land in Central London. A development that solely focused around improving the public realm and therefore improving the value of the area.

Objectives for doing this were as follows:

“Experiences are the new capital of urban design (and where commercial value truly lies,) however, there is often confusion around how to make places worth experiencing. The smart city agenda is an example (one of several) where the natural attractiveness of innovation and performance as part of the place is seen to be cutting edge and therefore critical to success. However, technology is an enabler of success (sometimes dominating the planning discussion and creating high performance at the cost of human scale amenity) and not an outcome in its own right.”

Sydney’s Science Park master plan illustrates this precedent for balancing systems and empathy. Despite it being a vision for a technology-enabled innovation community it’s characterised by great urban spaces over how smart it is.

YOUTH, PLAY, JOY AND FUN IN THE CITY

Connecting our cities to younger generations is strong way of ensuring they grow to appreciate the cities worth.

“All too often the serious business making great development becomes serious – and unintentionally creates outcomes that are a little joyless. Many developers around the world are turning their attention to opportunities for young people in urban places, urban play enjoyments, addressing perceived ‘nature deficit disorders’ and funding large scale (and fun) interactive public art installations. These things really do matter – they are the moments that instantly go global through social media, they are things that make a child’s day memorable rather than mundane and – for young cities like Australian cities – they are moments that make the idea of intensification and change worthwhile.”

At the heart of a relatively serious precinct filled with major institutions and icons is the Darling Harbour water and play park. It’s an engaging and fun experience that creates moments for children in a precinct that they’ll later come to appreciate for different reasons.

BE FOCUSED AND DEMONSTRATE

Public realm is a consistent canvas or ‘stage set’ from which development can emerge. Bringing that stage to life using urban design is similar to all other creative processes. The most important aspect is not getting stuck in a nebulous of high level thoughts whereby the underlying actions that will bring them to life don’t become reality.

“When it comes to delivering great urban design, investment spread too thin is far less impactful than investment focused in the right place in the right time. The ability to demonstrate your desired intent through action is a powerful tool. Examples such as the Sydney laneway festival demonstrate the way which engaging events can occur in the under-utilised spaces of the city or, in the case of the Albert Street Picnic in Brisbane, demonstrate how a street can be transformed into a new urban park. These lessons ring true for privately held precincts where temporary markets and community events are powerful tools that set a tone for the future.”

Melbourne in particular is a city that has a strategy of quality and simplicity which started with a focused intent and has spread across the CBD over a generation to define the aspirations for an entire city. An example of this is Melbourne city’s “green the city” initiative which has one clear vision yet creates various other bi-products that make Melbourne more liveable.

Via the Urban Developer

How to Apply DDA to Street Furniture: Seats and Tables Sep 26, 2019