The much anticipated Sky Garden gracing the top of 20 Fenchurch St, London, was opened to the public on Monday. Coined the Walkie Talkie building for its swollen upper levels and subsequent resemblance to the apparatuses, the nickname has taken like a duck to water.

One of the advantages of swelling the building is having more leasing space on the higher levels that attract better views and thus better, and more, rent. However it’s also an interesting and obscure visual concept, in contrast to the conventional skyscraper which aims to get thinner as it gets taller. The Walkie Talkie building boasts economic features as much as visual ones.

Sky Garden, the selling point of the building, comes as a reinterpretation of a public park and communal space, as envisioned by the architect, Rafael Viñoly. Perhaps also as a means to securing planning permission, some suggest, given the site is outside of London’s cluster of skyscrapers.

The three-storey public park commences on the 35th floor, taking advantage of the unusually increased space as the building rises. The foliage ascends the building alongside mild staircases, pointedly giving the effect of gently climbing a mountainside.

Bars and dining spaces are scattered through the high rise Sky Garden, with ample room for some 400 diners at any one time and additional space for a further 200 members of the public, bookings required.

Barely a year prior, in London’s summer of 2013, reports surfaced that the building was reflecting a beam of light so intense that it could, and did, melt cars, a Jaguar. This rare little, ‘hiccup,’ was quickly identified and rectified for a small, single digit millions, dollar sum. 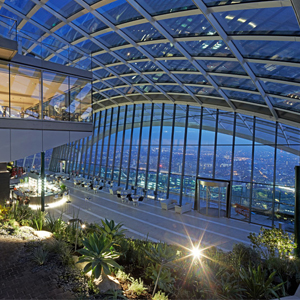 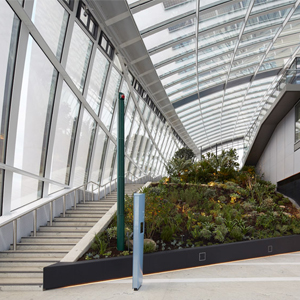 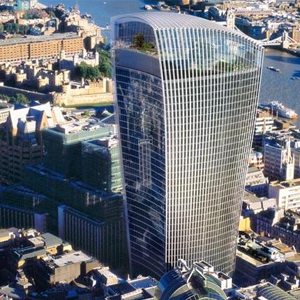