The Future of France

Given the controversy that still surrounds the Montparnasse tower, completed some 40 plus years ago, it’s hard to imagine the futuristic proposal “2050 Paris Smart City,” in a realistic manner. The proposal comes about as a response to architectural responsibility to the environment, examining the role of high-rise architecture and targeting a 75% decrease in greenhouse gas emissions by 2050.

Eight different green towers have been designed for the concept, some extensions on existing buildings, others to be built from the ground up. In different ways, each tower will integrate and interact with diverse elements of nature and renewable energy; passive heating and cooling, rainwater recycling, community gardens and living green walls imparting pockets of fresh air into the city centre, to name a few.

Vincent Callebaut Architectures, responsible for the proposal, remain adamant that the green skyscrapers will fit in with the structure and aesthetic of the historical city.

Towers are set to be of mixed use, fusing residential, commercial and business complexes into the one space. Ideally, this would cut the need for daily transportation, effectively cutting economical and environmental costs. Yet surely, if we lived, worked and shopped in the same building, I imagine we’d also be cutting the prevalence of incidental exercise.

Of the 8 proposed new building, the three that most caught my eye were the Antismog Towers, the Mangrove Towers and the Bridge Towers.

Visually reminiscent of their namesake, the Mangrove Towers are to be built over Gare du Nord accommodating a variety of offices, hotels and houses. Using state of the art technology, platforms will comprise of piezoelectric captors, capitalising on the foot traffic of the busy train station to generate energy.

Bridging together the east and west banks of the city, the Bridge Towers will use kinetic energy from the river beneath to produce positive energy. True to the reoccurring theme, the buildings atop the bridge will again be a mixture of residential and office suites. A reoccurring theme that aims to address and revert the housing crisis that the city of Paris, among others, currently faces.

There are unquestionably clever, forward thinking and truly innovative aspects to this proposal. However the visual illustrations alongside the proposal render the iconic French city completely unrecognisable. In 35 years I’ll be surprised to see Paris Smart City. 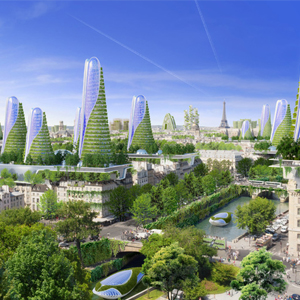 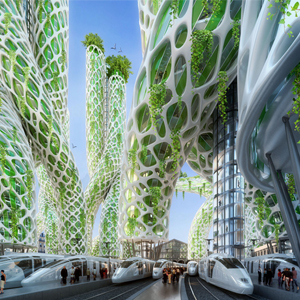 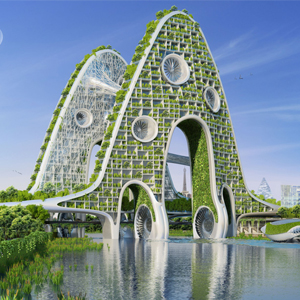