The newly completed Lady Cilento Children’s Hospital on Brisbane’s south bank adopts a salutogenic approach to healing. The term coined late last century by Aaron Antonovsky refers to the utilisation of factors that support well-being and health, rather than those that cause disease.

Aspects such as clear way finding, allusions to the surrounding environment, stunning views of that environment, open spaces, green roofs and sustainability are all pointedly drawn from this salutogenic methodology. A truly holistic building, the children’s hospital also houses some of the world’s most advanced diagnostic, interventional and treatment facilities.

The structural framework of the building was actually designed to reflect a tree. Double heighted spaces jut out from two vertical atria, the intended effect being that of a tree with branches; almost like seeing the picture because of the black space surrounding what isn’t there. The braches extend to the edge of the building, bearing numerous viewing platforms expressly pointed in various directions of iconic Brisbane; the CBD skyline, the adjacent parkland, the Brisbane River and even the distant mountains each in view. Once explained it is admittedly much easier to visualise this building as a tree.

Far more than providing a colourful and playful atmosphere for the building, the colour palette of both the interior and exterior has been expressly chosen to mimic the colours of Queensland. The green and purple of the exterior in fact represents the native bougainvillea plantings of the afore mentioned parklands. Alternatively, the interior of the hospital uses vibrant colours which draw on the classic colours of the flora and fauna native to Queensland’s rainforests.

The 12-storey, 95,000m² building is a visual challenge to not only the conventional high rise building, but more importantly to the abundance of functionality driven, medico-centric hospitals which tend to lack in the patient experience arena. 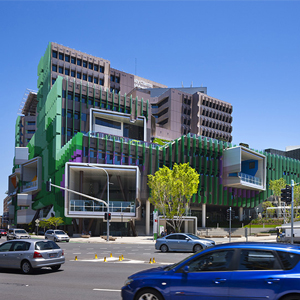 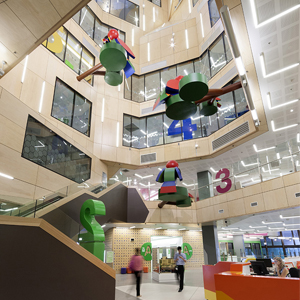 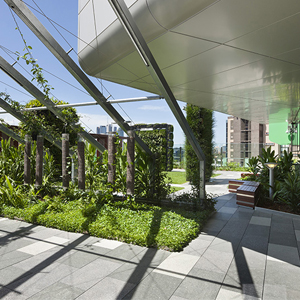