Rather than the addition of a traditional balcony, a suspended green pathway has been suggested by a Polish architecture company for the third floor of an office building.

Three floors above the regular courtyard, this whimsical green pathway will have the illusion of floating in the air, inviting the building’s inhabitants to momentarily leave their regular world of work and responsibility to follow an enchanted, winding path for a mini-break.

The spiralling nature of the path was purposely intended upon, as to imbue a sense of free flow and exploration; something a linear or even a conventional circular path would not offer.

The idea came to the original designer on a hot day when the courtyard seemed too far away from his third floor office. The suspended green pathway offers immediate access to a green space without the need to venture downstairs. An office worker is able to step outside and follow the path as it eventually spirals around to the neighbouring office, feeling refreshed and uplifted from a burst of fresh air.

Mounting and support is established by a series of thin wires projecting from the surrounding four walls. Furthermore, to ensure minimal impact to the courtyard beneath and the other inhabitants, the green pathway will be just 80cm wide with a curved metal underbelly; the reflections off which will help the elevated path to blend into the scenery as well as prevent unprecedented shading.

The designs are a truly innovative concept, turning traditionally unused space into a grassy path suspended fantastically in the air. 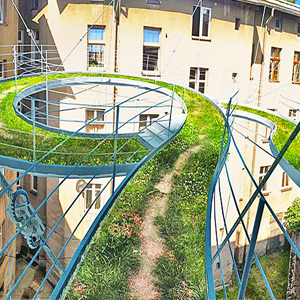 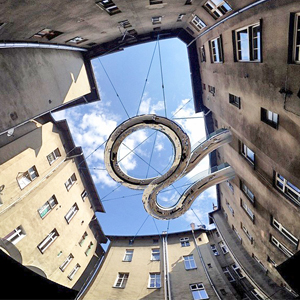 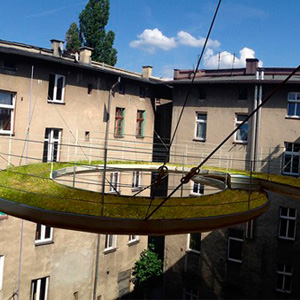